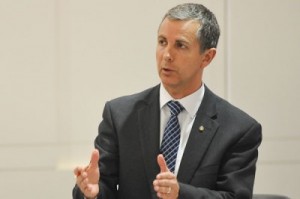 JEREMY Hanson says the government’s latest assessment of the ACT’s health system has painted a dire picture, with only 39 percent of ‘urgent’ patients seen on time in the Canberra Hospital emergency department.

“Overall, the percentage of patients seen on time in ACT emergency departments has worsened from an already low 61 percent last year to 59 percent in 2014-15,” Jeremy said.

“Waiting times in the second, third and fourth triage catagories all increased.

“Critically, only 39 percent of patients classified as ‘urgent’ were seen on time at Canberra Hospital.

“Under ACT Labor’s watch, the health system has consistently underperformed and Simon Corbell has failed to make a difference since taking over health at the start of the year.

“Unfortunately, I’m no longer surprised when new data is published because it’s been the same story in health under ACT Labor for years. Waiting times have declined, the hospital is bursting at the seams and the endemic toxic bullying culture has not been fixed.

“Health is in crisis. I want Canberra to have the best health system in the country, unfortunately now its languishing as the worst. Now is the worst time for the government to be spending $1 billion on light rail,” Mr Hanson concluded.