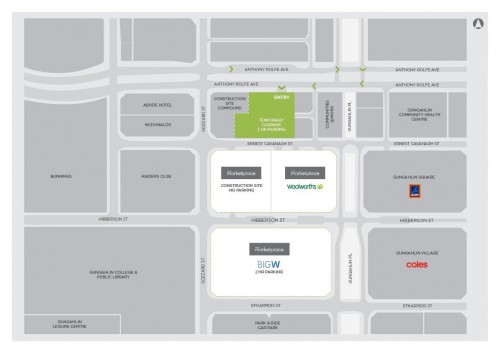 “To allow for this construction work to be finalised, Hibberson Street will be closed to all traffic between Gozzard Street and Gungahlin Place West from Tuesday 13 October 2015 until Tuesday 8 December 2015,” Tony said.

“This closure will allow for the construction of a tunnel that will link the new underground car park to the existing basement under Big W.

“As a result of the road closure, ACTION bus services will change around the town centre.

“From Monday 12 October 2015 buses will be diverted at the corner of Kate Crace Street and Hibberson Street and rerouted around the construction site via an alternative route to other traffic.

“Two new temporary bus stops on Gozzard Street, near the Raiders Club, will replace the existing bus stops outside Woolworths to meet the needs of bus passengers. This diversion is expected to add up to five minutes to bus running times.

“The nearest alternative temporary car park is currently located off Anthony Rolfe Avenue opposite McDonalds restaurant with an undercover link created to provide direct access to the shopping centre.

“The ACT Government is working with the developer to minimise the length of time Hibberson Street is closed to traffic and to provide maximum pedestrian access to the and facilities in the vicinity of the construction site,” Mr Gill concluded.