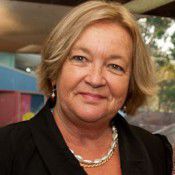 JOY Burch has taken the unusual step of issuing a “media statement” castigating “one media outlet” for publishing a picture of the cage her education system had put a child into.

(It’s worth noting the case prompted international media like the Guardian to go with the headline “Canberra school principal sacked over caging of special needs boy“.)

The findings of the independent investigation into the construction of an inappropriate structure were released yesterday and have by now been widely reported.

Unfortunately, today one media outlet has chosen to go further in publishing a photo depicting the inappropriate structure itself.

I have worked very hard to maintain the privacy and dignity of those involved. I believe the decision to publish this image is a heartbreaking outcome for the family, as well as emotionally damaging for all other parties involved.

I accept that the community rightly wanted answers as to how such a structure came to be. Information about this is now freely available to the public at www.det.act.gov.au

Publishing this photo does not assist in getting to the truth or add any more insight as to why it was constructed.

It is my understanding that a number of other media outlets have previously had access to these pictures but have chosen not to publish them out of respect to the child and family. I am disappointed that one local media outlet has now chosen to so flagrantly disregard the interests of the child and family involved in such a manner.

I call on all responsible media outlets to continue to show respect to the privacy and dignity of those involved in this matter.

Danielle Nohra - August 12, 2020
9
SEVENTY household representatives from the upper part of Goyder Street, Narrabundah, have signed a petition calling on the ACT government to take urgent steps to fix the street’s traffic issues.