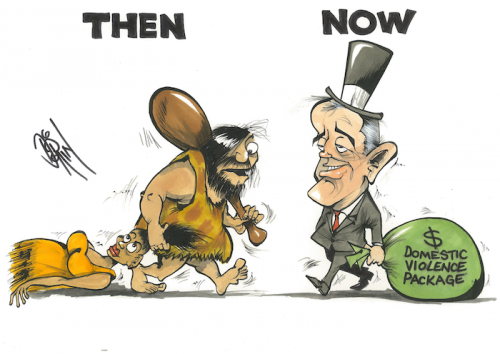 WITHIN moments of the Prime Minister’s domestic violence announcement last week, I was getting calls from radio listeners who weren’t on the same page as Mr Turnbull.

These people, men and women, believe that the push against domestic violence somehow discriminates against men.

They’re wrong. We have women losing their lives at the hands of those close to them every week and it can’t continue.

The detractors tell me that there is a lot of domestic violence perpetrated against men by women. They’re right… there are women who hit men and do other unacceptable things to the men in their lives, but the great difference is that men aren’t being killed by their partners.

What we saw last week was about saving women’s lives. We’ll never eradicate domestic violence in this country. As a nation, our response to the problem has to be much more than just giving the victims somewhere to hide and more than just locking people up for longer periods of time.

What I’d like to acknowledge is that there will be some collateral damage in all of this. In our efforts to protect vulnerable women, there will be some cases in which some men get the raw end of the deal in regards to court outcomes, police and AVO outcomes. That’s not fair, but I think they’ve just got to suck it up. We can’t accept the situation as it exists at the moment.

Australian men need to understand that it’s never ever okay to hit a woman. Blokes need to find a backbone and more than anything else to find patience. It’s a difficult thing for some, but we need to find the strength to turn the other cheek and just walk away. Sometimes that’s going to be desperately unfair and there will be occasions when men are taken advantage of, but that’s just the way it has to be.

It’s not about who’s right and who’s wrong. When you’re sitting in a jail cell trying to come to terms with just what you’ve done, who was wrong and who was right will be irrelevant.

We spoke with some counsellors who continued to hammer home this point: “You can’t determine how somebody else responds to a situation. You have no control over whether your partner lashes out at you whether it be verbally or physically. The only thing you can control is what you do. And nothing can justify hitting a woman.”