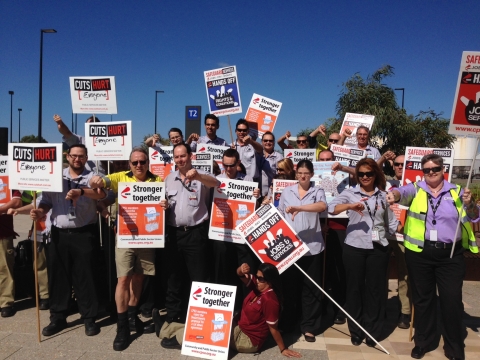 The Community and Public Sector Union has announced a series of public service strikes to protest cuts to pay, conditions, and headcount.

Public servants in Human Services, Defence, Immigration, Customs, Agriculture and the Bureau of Meteorology, among others, are preparing or taking industrial action in protest at Government plans to cut conditions in return for low-ball pay offers.

“The Government has already cut 11,000 public sector jobs in the past year, a massive hit and the third straight year of cuts. This Government has gutted the Tax Office with 4400 people gone, decimated the CSIRO with 1 in 5 staff gone, and cut the ABC,” Community and Public Sector Union National Secretary Nadine Flood said.

“Not content with cutting the jobs of so many people, this Government is now attacking workplace rights and conditions and pay in the public service by offering a deal so draconian that no one could accept it. No major private sector employer in Australia is making these sorts of offers.

“Workers are being asked to cop a cut to rights and conditions, in return for low annual pay offers of between 0% and 1% a year that leave real wages going backwards.”