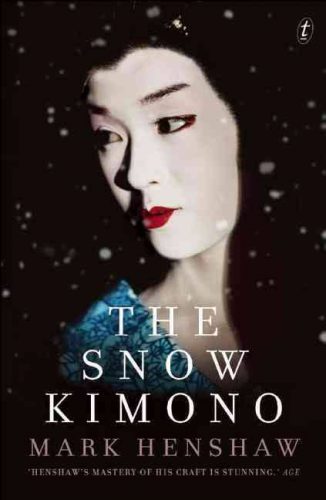 MICK GENTLEMAN says Mark Henshaw’s The Snow Kimono has been announced as the winner of the 2015 ACT Book of the Year at last night’s ACT Writers Centre awards event.

“Congratulations to Mark whose work The Snow Kimono has been chosen as 2015 ACT Book of the Year,” Mick said.

“Mark is an outstanding local author whose latest work has received praise not only in Australia but around the world. The Snow Kimono was many decades in the making and it is wonderful that it is receiving the praise and recognition it deserves.

“I would also like to pass on my congratulations to Omar Musa who was highly commended for his work Here Come the Dogs, and was also voted People’s Choice.

“Congratulations must also go to the two other shortlisted authors, Jono Lineen for Into the Heart of the Himalayas and Sam Vincent for his work Blood and Guts. All of this year’s shortlisted authors produced works of exceptional quality, and they are all outstanding authors whose work should be celebrated.”

“In recognition of their great work, and for the first time, Omar Musa will receive $2,000 for being highly commended, and Jono Lineen and Sam Vincent will each receive $1,000 for being shortlisted.

“It is important to recognise the great talent we have in our city through awards such as the ACT Book of the Year. The ACT Government is proud to continue its support for our writers through this award, and I would like to encourage all local authors who had a book published this year to consider submitting their work for next year’s ACT Book of the Year Award.

“We have outstanding literary talent and this award plays an important role in recognising our authors,” Minister Gentleman concluded

Nominations for the 2016 ACT Book of the Year Award will open early next year.