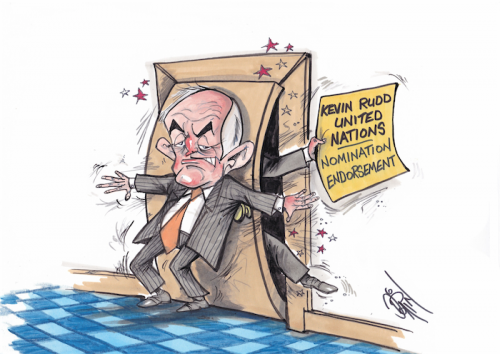 IT began with the reshuffling of the deck chairs on the Federal cruise liner; and in its wake the ACT Libs’ Tugboat Annie with skipper Jeremy Hanson rearranging the wardroom after petty officer Brendan Smyth jumped ship.

Our own Senator Zed Seselja earned an extra stripe from Malcolm Turnbull on the bridge as Assistant Minister for Multicultural Affairs and made an immediate impact with a sensible response to the overly-excited fears of a TV hostess about terrorism and a welcome pledge not to block same-sex marriage legislation.

However, some of his matelots on the conservative wing were not so accommodating. Queenslander George Christensen is already threatening to cross the floor if he doesn’t get his way with his favourite policies.

The new Hanson shadow ministry contained few surprises as he distributed Smyth’s portfolios across the team. Some changes rectified anomalies – adding higher education to the bailiwick of the personable and competent Steve Doszpot, for example.

Giving the vital Treasury to Deputy Leader Alistair Coe rather than taking it himself was interesting. Coe has carried the fight against light rail as Transport spokesman; but its political bite comes from whether we can afford it.

THE Barr-Rattenbury team took the light rail issue the next step with a survey of preferred extensions to the Gungahlin line. This at least will give other Canberrans the sense of inclusion in the project. But at what cost? That’s the 64 billion dollar question!

STILL on transport, airport boss Stephen Byron is cock a’ hoop over the international addition starting in September; the best news for senior travellers being his promised “short walk” from domestic to overseas flights. Navigating most overseas airports can be a marathon, even with the moving walkways.

SPEAKING of seniors, a fascinating survey this week showed that more are having an evening tipple while teenagers are drinking less. Overall, the Australian drinking trend is downward but about six per cent more of those over 60 are soothing their troubled brows with a glass or two. And with the world the way it is, who’s to blame them?

THAT indefatigable Queenslander Kevin Rudd leapt back into the news with his plea for the Turnbull Government to nominate him for UN secretary general and found some senior backers in Dick Woolcott and Foreign Minister Julie Bishop, both of whom he courted assiduously as PM and Foreign Minister with just this situation in mind. Whatever the outcome, he’s the biographer’s gift that keeps on giving.

THE US election held one of the keys to Rudd’s future. He cultivated Hillary Clinton for years and it’s hard to believe – after that chaotic Republican convention – that Daffy Donald is going to beat her in November. In a delightful twist, “The New York Times” calculated that her chance of winning was exactly the same as an NBA player scoring from a free throw: 76 per cent. Watching Trump’s acceptance speech, we couldn’t help wishing it a little higher.

AT last we’ve come to the pointy end of “Masterchef” where we’re unabashed fans of yet another fellow Queenslander Matt Sinclair who’s headed for culinary stardom whatever happens. Actually, did you ever think what Australia would be like without Queenslanders?