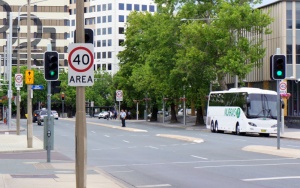 The speed restrictions are in place between 8am and 4pm within sign-posted school zones and police will be targeting speeding in school zones throughout Canberra.

“It’s important for drivers, particularly those who drive through school zones regularly, not to become complacent about the speed limit,” Acting Station Sergeant Hedges said.

“Slowing down to 40km in school zones is important for two main reasons; it gives drivers more time to stop in an unexpected situation and in the event of a collision it lessens the force.”