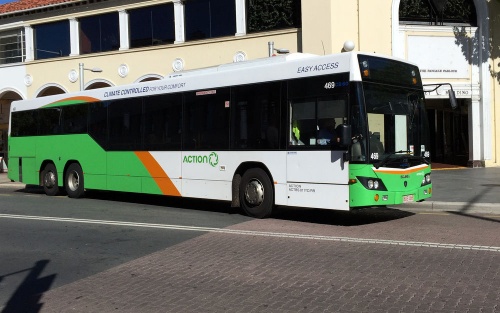 ANDREW Barr has announced a $17 million investment in the ACT Budget 2016-17 for new transport services, including $10 million for 20 new buses.

“The new investment includes a new, free City Loop bus service in Civic, an electric bus trial, new bus services in Weston Creek and Molonglo, a new Park and Ride facility in Wanniassa, improvements to the Woden bus interchange and a new bus depot in Woden, all of which are part of our plan to improve our public transport system so it becomes more convenient, efficient, affordable and reliable,” Andrew said.

“The City Loop will start on 4 July 2016 to coincide with the new Transport Canberra agency. Transport Canberra will be responsible for integrating buses with the new light rail, developing a single ticketing system and new coordinated timetabling, active travel upgrades and transport innovation. The City Loop is one of the ways the ACT Government is making public transport more frequent and easier to use, with a strong focus on the customer.

“The new service will provide a convenient link to highly-frequented areas of the CBD such as the City Bus Station, Canberra Centre, Braddon precinct, Northbourne Avenue, the Australian National University and New Acton precinct.

“The City Loop will provide a convenient ‘turn up and go’ weekday service for commuters and will connect with high frequency Red and Blue Rapid services and buses to the Parliamentary Triangle. The service will support local businesses and help Canberrans travel around popular areas in the CBD for free.

Minister for Transport and Municipal Services Meegan Fitzharris said the ACT Government is improving transport for Canberrans, wherever they live. The free Transport Canberra City Loop is another way the ACT Government is funding better public transport. The service will be frequent and free, and allow people to get from one part of our city to another in a really convenient way.

“Further demonstrating our commitment to exploring sustainable forms of public transport, we will also run a 12 month trial of up to three electric buses. This is a great initiative and one I think Canberrans will be really excited about,” Meegan said,

“The Budget will offer better services in our growing suburbs to make it even easier for people to choose public transport, including:

“These significant investments are part of the ACT Government’s commitment through Transport Canberra to improve our public transport system so it is more convenient, efficient, affordable and reliable – a genuine alternative to driving,” said Minister Fitzharris.

CityNews - April 12, 2021
0
Canberra activist Kat Reed hopes to raise the profile of diverse young people in the community after being recently named Young Canberra Citizen of the Year.