THERE’S a rumour doing the rounds that “The Chaser’s Australia” is going to win the next Man Booker Prize, says “Chaser” team member Charles Firth.

That literary work is their excuse for appearing at the Canberra Writers Festival in late August.

It’s a bumper edition of their already popular magazine of the same name, and Firth says: “We plan to supplant ‘Wikipedia’, as we give you all the info you need about Australia.

“I hope it will become an official school textbook and an introductory text on citizenship.”

Intended as a “useful guide” to Australian culture, it boasts of featuring “fewer facts than an Andrew Bolt column”. The entire section on Aussie cuisine, for instance, is devoted to chicken salt.

In the culture section, “alcohol”, dealing with the mystique of “the shout” at the pub, they tell you how to ascertain whose shout it is… “you’re not an Australian if you don’t take part in the shout – four drinks minimum”.

And, yes, Firth says, the book does have a perspective on Canberra, and it’s not good.

While all the other states and territories command a fair bit of space, there’s just one page for Canberra, and it claims with joyous inaccuracy that our population is made up of 98 per cent public servants and two per cent visitors.

But there is substance to the politics section, Firth assures “CityNews”. They go back to Edmund Barton but focus on our last eight PMs.

The show, staged by Firth and his “Chaser” colleague Mark Humphries is “a one-hour roadshow spectacular”.

They start off with their version of “The Lord’s Prayer” that goes: “Our Father, who art in Point Piper, Malcolm be thy name”. Then they look at the second verse of “Advance Australia Fair” that,  they assert, any true blue Aussie must NOT know. There’s a quiz at the end.

“We’ll lift the tone of the Writers Festival,” Frith says.

None of the above fazes festival director, Vickii Cotter.

The Canberra-born former Hawker College girl, who is also the director of the Noosa Jazz Festival and her own event-management business has deliberately courted controversy in programming the festival, around Power, Politics, Passion – “That’s the catchcry… it gives it a Canberra flavour and identity,” she says. 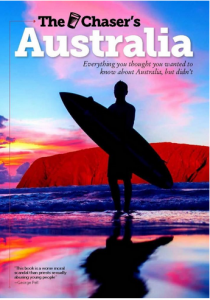 Along with prolific local talent, high-profile guests, such as AC Grayling and “Life of Pi” author Yann Martel, play an essential part but getting them can be “a really hard part of establishing a new festival in the first year,” so the key has been a partnership with the Melbourne Writers Festival.

The variety is impressive. There’ll be workshops book launches programmed by a clever intern and dozens of local region writers on show.

Look at these contrasting sessions: a conversation on modern masculinity between novelists Nick Earls and Marion Halligan; speechwriters Paul Ritchie, Michael Cooney and Mark Brandon-Baker; performances of “The Hansard Monologues: Age of Entitlement” by Katie Pollock and Paul Daley; a keynote address by journo Stan Grant and a lecture, “Progress in Troubled Times: Learning from ‘The Age of Genius’.”