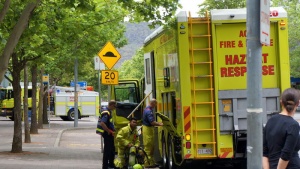 ANDREW Barr says a re-elected Labor government will invest in the emergency services.

“Canberra’s population is growing by 5,000 people every year,” Andrew said.

“This means that while our emergency services already provide great service to our city and some of Australia’s best response times, we must invest now to ensure that continues into the future.

“We will hire more firefighters and more paramedics, invest in new equipment to help them do their jobs, start work on a new emergency services station in the CBD and strengthen our capacity to deal with bushfires. We’ll also introduce new measures to protect our emergency services workers.

“Labor will enhance our capacity to attack bushfires before they become a threat by partnering with the National Aerial Firefighting Centre and NSW RFS to contract an additional fast attack helicopter and by training additional volunteer Remote Area Firefighting Teams.

“Labor understands volunteers contribute enormously to emergency services. That’s why we’ll work with our volunteers to ensure they get the support they need for arduous and physically demanding work. A re-elected Labor Government will support volunteers to maintain the required high level of fitness with subsidised gym memberships which will improve firefighter safety and the ability of our firefighters to get the job done.

“Importantly Labor commits that, under a re-elected ACT Labor Government, there will be no part-time fire stations. We will not open part-time stations or operate any existing stations at part-time hours.

“As part of our comprehensive plan for all emergency services in Canberra, a re-elected ACT Labor Government will invest funding for feasibility and design of a new Fire and Ambulance Station in the city centre. This new centrally-located station would relieve demand on Ainslie, Aranda and Fyshwick fire stations, provide greatly improved response times in Civic and reduce demand on ambulance stations across Canberra’s regions, allowing them to focus on suburban emergencies.

“A critical part of Labor’s emergency services package is the recruitment of an additional fire crew and an additional ambulance crew, which will be accommodated within existing networks until the new city station is built. The new crews would also have the flexibility to be based in the city on an ad-hoc basis to better meet demand. Labor will also recruit additional firefighters to meet growth in the service.

“Labor also commits to focus on increasing the diversity of the workforce with recruitment targeted at promoting the career to women and Aboriginal and Torres Strait Islander people.

“The ACT has Australia’s best ambulance response times and healthcare has always been a priority for ACT Labor. That’s why, in addition to the extra ambulance crew, the ACT Labor Government will deliver two new intensive care ambulances.

“We all know our police and emergency services are regularly exposed to traumatic events. To better protect the protectors, a re-elected ACT Labor Government will work with stakeholders to deliver enhanced mental health services, building on peer support programs within the emergency services, by providing funding for psychologist oversight and additional peer support training.

“A re-elected Labor Government will also legislate a 25/kph speed limit around emergency vehicles to provide protection for emergency service personnel such as our State Emergency Service volunteers, who regularly work on the roadside in dark and stormy conditions and are at risk from passing vehicles.

“Labor stands on a strong record of investment in our fire services. We’ve increased funding for our fire services by 29.9% from 2010 to 2015 (ROGS 2016) when Liberal Governments in other jurisdictions were cutting funding in real terms:
— NSW 0.16% increase
— WA -13.1% decrease
— VIC 7% increase (before the Andrews Government)

“We maintained the second highest number of paid firefighters per person of any jurisdiction and when the Federal Liberals cut funding for our fire services by $5.5 million a year we plugged the gap.”