FORECASTERS at the Bureau of Meteorology are monitoring a complex weather system that has the potential to bring rain, thunderstorms, winds and damaging waves to southeastern Australia during Wednesday.

“Many Australians are already dealing with flood warnings. With people on the move during school holidays, it’s important that you plan your travels with the severe weather in mind,” Andrew said. 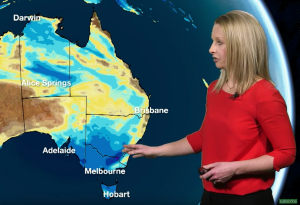 “Rain totals in South Australia have been forecast at 50-100mm across Mid-North and Mount Lofty Ranges and 20-60mm for Adelaide metropolitan area and Agricultural Districts over Thursday and Friday.

“A Flood Watch has been issued for the Mid-North, Mount Lofty Ranges and Adelaide metropolitan area Districts for Wednesday and Thursday.

“Catchments in New South Wales, Victoria and Tasmania are currently saturated which means that any renewed rainfall could generate river rises and possible flooding.

“There are a large number of flood warnings current across Victoria, NSW and Queensland, and we have seen a major flood peak on the Lachlan River at Forbes in NSW overnight.

“As this event evolves, the Bureau will be updating its warnings. Go to www.bom.gov.au for the latest flood and weather warnings and rainfall and radar information, and stay tuned for media broadcasts for up-to-date information in your area.

“We also ask residents in affected areas to listen to the advice of their local emergency services and not enter floodwater.”

CityNews - May 27, 2020
0
There have been no new COVID-19 cases recorded in the ACT in the past 24 hours, but with restrictions easing further, ACT Health warns a new wave of the virus if people become careless.