Home Lifestyle Canberra Confidential Canberra Confidential / Hold the hard hats, here come the babies
Share Canberra's trusted news:
Facebook
Twitter
Pinterest
WhatsApp
THE ACT election, the gift that keeps on giving; how CC wishes the caretaker period could go on and on (like a Federal election) and we didn’t have this date with destiny so soon on October 15.

Not that too many of the early nominated Labor candidates would think that. They’ve been pestering voters since February and before!

But slipping into caretaker mode (when the public service runs the place, as it used to be before self government) didn’t come without a maelstrom of last-minute announcements, stunts and sod turnings from the Labor government before it swapped those hard hats of progress for hand shaking and kissing unwitting babies for the month or so before we reach the ballot box.

Star of the silver shovel over recent weeks would have to be Mrs Gungahlin, Meegan Fitzharris, minister and probable Labor Opposition Leader if there’s a change in government next month.

She’s leading the red team’s ticket for the new, northern seat of Yerrabi and has had her ministerial face everywhere, sod turning every time someone put a spade in her hands. 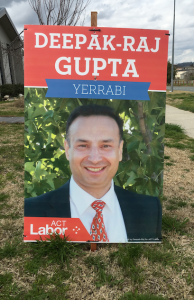 ONE of Meegan’s chums on the Yerrabi ticket is the tireless “of-the-community, for-the-community” candidate Deepak-Raj Gupta, the highly popular political first timer, who is the victim of a costly affection from his electorate. It seems his fans can’t resist nicking the poster boy’s election signage.

Of his 400 corflutes, 50 have been stolen; curiously, always from supporters’ gardens, never from roadsides. Deepak-Raj thinks he knows who’s souveniring his signage (and it isn’t the Libs), but if he’s wrong, he’d be happy to autograph them – after he’s elected, of course.

At the shops, somewhere

MEANWHILE, Shane Rattenbury, still nostalgically presenting himself to the voters of the new electorate of Kurrajong as the “ACT Greens Member for Molonglo” produced an “Invitation to meet” flyer announcing his presence at local shops around the inner south. We liked this venue: “Manuka Shops (Green Square)”. As a Canberra Grammar old boy, we can’t believe Ratters doesn’t know the difference between hanging out at the Manuka and the Kingston shops. 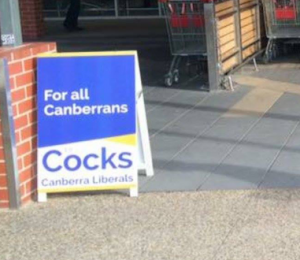 AND from Tuggeranong, this gloriously ambiguous sign from faceless Brindabella candidate Ed Cocks. The Libs have assured us it’s an election poster and not a policy.

Exhibitionism from the Stones

HERE’S the creative “destination” thinking Visit Canberra must only dream about.

While we count the sleeps until November next year for the rebooted Abba musical “Mamma Mia” opens at Canberra Theatre, Destination NSW has exclusively bagged the Australian debut of the Rolling Stones’ first major exhibition “Exhibitionism”.

Drawing rave reviews for its London season, “Exhibitionism” is reported to be the largest touring experience of its kind ever to be staged, and the first time the band has unlocked its vast private archive.

There are more than 500 original items, spanning fashion, art, film and recordings. From cherished instruments, on-stage and off-stage clothes, works of art and handwritten lyric books to diaries, recordings, unseen film and photos, a screening cinema and interactive recording studio, that culminate into an exciting and powerful backstage-to-onstage 3D concert experience.

“It’s not going to be like walking into a museum. It’s going to be an event, an experience. It’s about a sense of the Rolling Stones – it’s something we want people to go away talking about it,” says singer Mick Jagger.

Alas, we won’t be talking about it until November 2018. It’s got a year in New York before us. Back to Abba in the meantime.

CityNews - February 28, 2021
0
POLICE have charged two people after they were both detected driving the same car on the same night while over the legal alcohol limit.