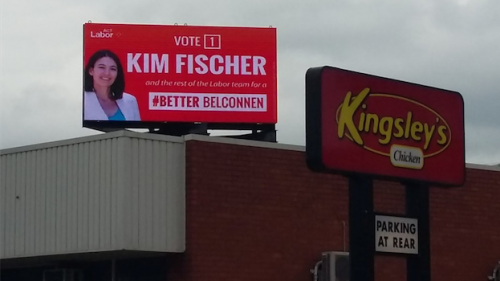 IS irrepressible Labor aspirant Kim Fischer, fighting to be seen in the cluttered field jostling for a seat in Ginninderra, at odds with the law with her cheerful, vandal-free, electronic advertising hoarding sitting atop the Kingsley’s outlet, facing Luxon Street, Belconnen?

Looking through the ACT Planning & Land Authority’s “Signs General Code” of 2008, CC was drawn to the definition of Kim’s billboard as probably being Third Party Advertising Signage that, in part, defines it as being “for a product, activity or event not sold or occurring on the land”. While a “Better Belconnen” is certainly laudable, it’s not arguably on the menu of the roasted-chicken shop below.

If, as the photo might suggest, it’s located on the first storey, ie above the ground floor, then the code says: “Content of the sign not permitted”.

Clearly, this is something Kim might like to have amended when she gets to the Assembly benches.

With a song in her heart…

WELL, she did it! First prize for “CityNews” columnist Nichole Overall, who had her steely gaze firmly on winning this year’s Canberra Takes 2 charity singing competition in duet with Drew Ashley.

The partners-in-song topped the fundraising with a head-and-shoulders $6524.25 slice of the evening’s $25,000 raised for SIDS and Kids at Queanbeyan’s Bicentennial Hall on September 10.

Purring fundraiser Trudy Taylor says: “I even had comments from people, who have been to all four CT2s, that the singing is getting better and better each year and that it was hard to pick the professionals from the amateurs in some cases.”

To which, in a moment of rare circumspection, Nichole replied: “I’m supremely confident the audience knew precisely who the amateur was!”

In 2013, husband and Queanbeyan mayor Tim Overall, in the guise of “Timmy Cash”, also won the award for highest funds raised, though the competitive Mrs O says we’re not to dwell on the $14k he raised (“He knows lots of people”). 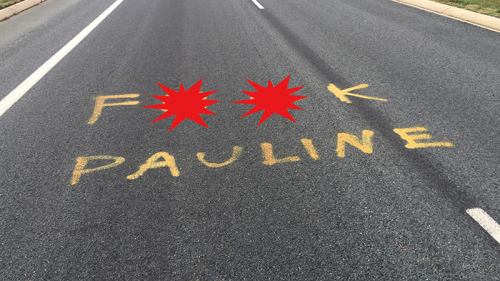 IN late July, CC gloomily reported the presence of this offensive graffiti daubed across the Mitchell end of Gungahlin Drive, at which time our northern snout says he’d been driving over the vulgarity for more than three weeks.

Using humour, we implored City Services to get off their bottoms and erase the offensive phrase. But no, the gnomes slumber on. We’ll try again in the hope that the “caretaker” bureaucrats have got more civic pride than the elected government to get this obscenity blacked over. Please. 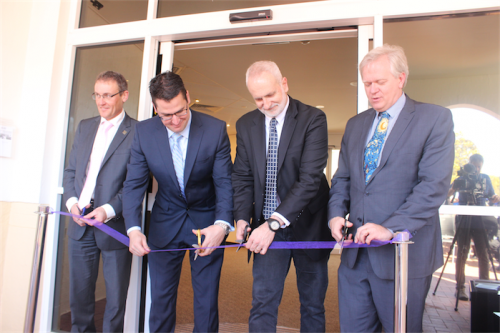 HOW silly is the concept of four suits with scissors simultaneously slicing the opening ribbon at the new visitors’ centre and cafe at Mount Stromlo?