CANBERRA-based Persian photographer and new-age nomad Parisa Applegarth is a people person, but not in the conventional sense.

Her interest in photography lies with indigenous peoples, highlighting cultures, tribes and traditions and how they cope with the changes taking place around them.

For example, her latest exhibition “Winter Wonderland” (at the Arboretum Village Centre until September 4), gives an insight into the lives of Sami reindeer herders in Lapland in the Arctic Circle, with her photos following the life of a Sami man living and working with the reindeer in a harsh environment and with little contact with the rest of the world.

“Today there are just a handful of Sami people left who still follow the old ways,” she says. “The reindeer depend on the forest for their survival, but the forests are under pressure from logging, mining and tourism.”

Some of her latest work focuses on indigenous communities in Australia, and tribes of Papua New Guinea and India.

“I have my last exhibition for this year coming up, early September, on tribal women of South-East Asia,” she says.

NO stiff upper lip for former army officer Jeremy Hanson when he gave a wide-ranging address to the party faithful and friends at the Press Club.

Beyond the expected tram/rates/Barr’s-mates blast, we got a glimpse of the ACT Opposition Leader’s softer side.

He described a September day in 2007, being a “jumble of nerves and emotion” as he flew into Canberra for nine days’ leave after eight months commanding an Australian Army unit training Iraq’s fledgling Army.

“With the demands of the job of keeping my soldiers alive, I had spent only a handful of days with my youngest son Robbie in the past year,” Hanson said.

“He was now 18 months old and I was afraid he wouldn’t recognise me,” Hanson said.

“As we descended, I looked out the window at Canberra below me and experienced a sense of belonging that I hadn’t experienced for 22 years.

“Approaching the terminal, I could see my wife Fleur holding Robbie.

“The fear that he wouldn’t recognise me was washed away when we met. He reached into my arms and hugged me without letting go for what seemed like an age. It was the greatest feeling of joy and relief I have ever felt in my life.

“And that feeling of belonging here in this city, of being home, is one that made me realise just how much I owe Canberra, how much I love Canberra and how much I wanted to contribute to its future. 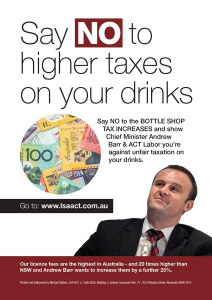 ClubsACT is well into its unremitting poster and coaster campaign in community clubs against tax imposts and the casino getting the Chief Minister’s nod for 200 poker machines.

Now the bottle-os have singled out Barr in an unflattering poster campaign urging the territory’s 300,000 weekly bottle-shop patrons to “say no to higher taxes on your drinks”.

The campaign is built around a petition against the ACT government proceeding with a 25 per cent increase in liquor licensing fees paid by bottle shops, which the association says are already the highest in Australia – currently 20 times higher than NSW. Despite their concerns about jobs and businesses, they say Barr has declined to meet with them.

But he’s not here to entertain, but to teach at what the host, Gary France’s Groove Warehouse, frothingly describes as “an AMAZING opportunity” for students of the pig skin to hang for one day only with good-humoured Gregg.

It’s at the Basement, Belconnen, over a couple of sessions on Wednesday, August 24. Bookings and details at groovewarehouse.com.au