“Council workers recently lifted some large sewerage pumps at the Morisset Street pumping station to clear blockages and were disappointed to find a number of rags, a large build-up of cooking fat and even a piece of wood entangled in the pumps,” he grumbled.

While he banged on about the pressure on Queanbeyan’s sewerage system from increased flushing of baby wipes, rags and cooking fat, CC was transfixed by the accompanying picture and wondered how the cretinous log who flushed it got it around the S-bend.

What’s in a name?

Co-writer and co-producer, Canberra-raised Sotiris Dounoukos has worked hard to get the shocking story of the young man given a lethal dose of heroin by his law-student girlfriend in Dickson in October, 1997, to the big screen. Highly-connected Helen’s helped him, where she could, over the past three years with contacts and introductions.

And as the credits roll, there’s author Helen Garner, on whose book the film is based, followed by… our Helen! Nice touch, Sotiris; she was tickled pink.

Antill we get it right…

SOMEONE writing captions for the “Canberra Times” in faraway NZ managed this howler on Page 2 in a sad story about a fatal car crash in Downer: “The car crashed in Anthill Street.”

Our senior Weston snout spotted it and forwarded it, sniffing: “The ants would be buzzing with fury!”

“WELCOME to our new, improved 666 radio page. We’ve redesigned the page in response to your feedback and requests, so you’ll notice a few positive changes,” gushed the ABC, oblivious to the large strip of beige above, guiltily labelled with a default message: “Program Header details not available”. That’s new and improved for you. 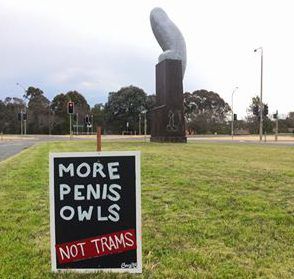 Goodbye the blot(s) on the landscape 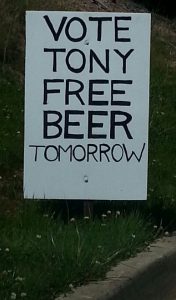 ONLY three years and 11 months before the Candidate Corflute Cavalcade returns. And aren’t we going to miss this wonderfully colourful, Photoshopped expression of democracy. Though CC will miss the wags rather than the wannabes. Here’s a couple that tickled our fancy…

“Plenty of quiz (and vote) worthy female candidates, but only one question about them,” she bemoaned. Given we’ve had three female Chief Ministers and one Speaker, she makes a fair point. Here’s a clue, Henry: Who was the female MLA for the Australian Democrats from 2001 to 2004? That’d be Roslyn.

TWENTY eight years since its debut, the second edition of the “Australian National Dictionary” is out in time for Christmas with more than 6000 new entries to its 16,000 Australian words and phrases.

Since its debut in 1988, the latest edition has included among the new additions and phrases Sorry Day, trackie daks, schmick, chardy, straight to the pool room, mugachino, firie, rello, Welcome to Country, bunji (a mate), yidaki (didgeridoo), drop bear, shirtfront and not happy Jan.

PM Malcolm Turnbull was presented with a specially bound, two-volume set. The Australian National Dictionary Centre at the ANU compiled the dictionary.

Robert Macklin - March 2, 2021
0
"What of the animal terrorists we’ve imported, bred in their millions and set loose upon the native wildlife? What of the feral cats, foxes, cane toads, wild pigs, donkeys, horses and camels that ravage the land and its unique and fascinating inhabitants?" writes "The Gadfly columnist ROBERT MACKLIN.