AQUIS Entertainment has welcomed the announcement of the launch of direct international flights to Canberra, saying that it further strengthens the opportunities for the ACT to benefit from its proposed development of an integrated tourism and entertainment precinct in the CBD.

According to Aquis Entertainment Director Justin Fung, it’s the projected increase to inbound tourism that promises to deliver far-reaching benefits to Canberra.

“The Deloitte study estimates that our project will attract up to 726,000 new visitors to Canberra per annum” Justin said.

“The outbound tourist market from China alone will double to 200 million by 2020 and Canberra is now incredibly well placed to take advantage of that opportunity”.

Justin congratulated the ACT Government and Canberra Airport on the result and reinforced his commitment to playing an important role in underpinning the ongoing sustainability of flights to and from Asia.

“They understands what a game changer international flights can be and have pursued this outcome even when it appeared unlikely. It’s now up to the rest of us to make the most of the opportunity and demonstrate that we can sustain international flights. And I know our project will play in important role in doing just that”.

Canberra Airport Managing Director Stephen Byron echoed Mr Fung’s views, reinforcing the need for investment in tourism infrastructure and product that allows the city to compete with other Australian capitals for a larger share of the growing inbound market.

“We see enormous potential for SE Asia as a significant inbound market. International flights open the front door and projects like the Aquis development round out Canberra’s appeal as a destination for that market” Steven said.

“It will help to attract visitors to the city and provides more accommodation options for them” Robyn said.

“The proposed integrated resort in the Canberra CBD… provides a large scale development that improves the city aesthetically, while bringing more activity to Civic by attracting people to visit, stay and socialise.”

Justin Fung says that he recognises that the full service gaming model requires a legislative change but insists that the city is ready.

“Canberra has come of age and if we are to compete for our rightful share of in-bound tourism, particularly from China and SE Asia, the city needs to be able to offer what they are looking for” Justin said.

“Our project compliments Canberra’s impressive natural and cultural attractions along with our growing epicurean profile to significantly boost our appeal. If we get that right, the flow on economic benefits will have a broader impact across the city.”

“Almost every other Australian city, and many more around the world, have recognised the value of including an integrated resort offering as part of their tourism asset base so to compete we need to embrace the opportunity now” Mr Fung said.

The proposed redevelopment is currently subject to Government and regulatory approvals.

Aquis have produced the above video which highlights the parts of Glebe Park that would be bulldozed to make way for the poker machines. 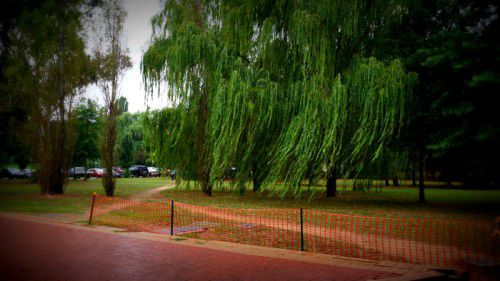