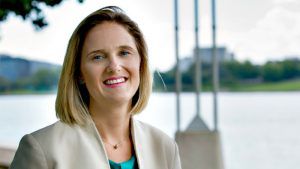 ACT Greens Senate candidate Christina Hobbs has taken issue with Zed Seselja back flipping on his commitment to vote for marriage equality following a positive result in the plebiscite.

“I have been on panel after panel with Mr Seselja over the course of this campaign, and he has repeatedly reassured young people and supporters of gay rights that that he would respect the outcome of a public vote on marriage equality regardless of his opinion,” Christina said in reference to comments made by Zed on ABC radio this morning.

“Just last week, Mr Seselja told students on an election panel that he would vote for equality if a plebiscite succeeded.

“Not only is he out of step with community views, but he is clearly misleading people on this campaign. This is exactly why young people, why all people are turned off from politics.

“Mr Seselja was one of the MPs who worked to deny his Liberal colleagues a free vote on marriage equality. Now he is denying the people of the ACT their right to be heard as well.

“Poll after poll shows that Canberrans want marriage equality – at least three quarters of us according to the latest research. There have been countless rallies and community demonstrations where thousands of Canberrans have turned out to call for equality.

“Canberrans deserve a Senator who will listen to them and reflect their views – or at least have the guts to be honest with them.”

Danielle Nohra - June 4, 2020
0
Saddened by the racial violence at the hands of police officers in the US, Canberra’s chief police officer, Deputy Commissioner Neil Gaughan, says dialogue with the community is really important to prevent that from happening here.