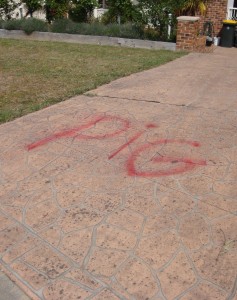 ACT Government Graffiti Management Coordinator Louise Emberson says property owners in Kambah with illegal graffiti on their fences may now have the option to have them cleaned by volunteers under a new initiative.

“Coordinated through Transport Canberra and City Services (TCCS), graffiti busters are getting to work,” Louise said.

“Dedicated volunteers have started to remove vandalism in their community.

“Paint and other materials are supplied by TCCS and the teams work to remove illegal graffiti with the property owner’s permission.

“TCCS has an extensive program to remove illegal graffiti from its assets which costs approximately $500,000 a year. The introduction of Graffiti busters will help to compliment removing of graffiti from private fences assisting property owners.

“Research has shown that prompt and persistent removal of graffiti is an effective way in discouraging repeat vandalism. It reduces the recognition that vandals desire and indicates the area is being monitored.

“Community groups including Neighbourhood Watch and Crime Stoppers have strongly supported graffiti busters with ACT Policing also getting behind the program.

“We have eight volunteers who have already expressed interest in joining graffiti busters. The volunteers will help make a positive impact in their neighbourhood and build on community pride.

“The suburb of Kambah was selected following members of the community coming forward keen to help remove illegal graffiti in their area. In future, as graffiti busters further develops, we will work to have the program move into other Canberra areas.

“Vandalising private fences has a negative effect on residents as well as the community.

“To allow for an alternative to illegal graffiti, there are currently 24 legal art practice walls across Canberra which primarily consists of underpasses and spillways. These provide a safe place for artists, while also minimising the impact on local residents.”

The first hands-on session of graffiti busters will occur today at a fence behind the Caltex Woolworths Service Station off Marconi Crescent, Kambah.

For more information, including how to register to join the program or have illegal graffiti removed from private fences in Kambah, visit tccs.act.gov.au or call Access Canberra on 13 22 81.

CityNews - June 3, 2020
0
"IT takes just two government ministers to postpone an ACT election. This is an astonishing power," reveals political columnist MICHAEL MOORE. "This extreme power is in place for unusual and disrupting circumstances such as… a pandemic!