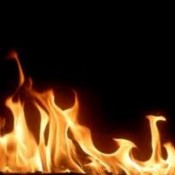 A HOUSE in Kambah has been destroyed by fire.

ACT Fire & Rescue responded to the Carleton Street property with three fire pumpers and various support functions when the alarm was raised at 11:13am.

Firefighters are working to extinguish the fire from outside the structure as part of the roof has collapsed.

It’s believed there is no one inside the property.

Firefighters continue to extinguish the fire and are now focused on the kitchen and family room area which is directly under the section of roof that collapsed earlier.

There is localised smoke in the area. Nearby residents and a school down the street have been advised to remain indoors until the fire is extinguished.

The HAZMAT unit and support pod units have now arrived at the scene.

The fire has been extinguished.

Firefighters are now wetting down the property.

The cause will be investigated.