MOVING the tourist centre to Regatta Point takes the cake! Chief Minister Andrew Barr states it’s easy access, plenty of parking etcetera.  It must be a different Regatta Point to the one I know.

Have you ever tried finding parking there unless you arrive very early in the morning? As to access for those towing caravans or trailers, it is ludicrous.

Almost all towns that I know of, here and from my trips to Europe, the tourist bureau/visitors centre is at the entrance to the town/city. Two examples here are at Bathurst and Batemans Bay. Folk want to find out about the town and tourist attractions when they arrive. The existing site is ideal, just ask any tourist.

Travelling with a car, let alone towing a trailer or caravan right through the city and then negotiating the turn into Regatta Point can be a hazard for locals, let alone tourists. Can you imagine tourists trying to access the site during Floriade?

The surprising thing is the NCA has gone along with this hair-brained idea. It’s obvious that Mr Barr is hell-bent on getting rid of any building along Northbourne Avenue to be able to sell it to developers for more high rise office blocks; clear the tourist centre, heritage houses, you name it to make more money to carry out more barmy ideas, such as the container fiasco.

CONGRATULATIONS to the ACT on becoming one of the first Australian regions to join an international network of cities and regions aiming for 100 per cent renewable energy.

The move comes in the same week as some of the world’s leading brands, including the BMW Group and Coca-Cola, announced that they will also source 100 per cent of their electricity from renewable energy such as solar.

Australian communities love solar and are to follow the shining example set by the ACT. You are showing our nation and the world that more renewable energy can create a clean, safe future for all of us – with the bonus of local jobs and investment.

The community is ready for a 100 per cent renewable future. Solar and renewables are here now, ready for all levels of government to facilitate the clean energy future Australians want to see.

I HAVE just finished reading five articles in the national press on the ice task force report, comprising 2270 words. The good news for users and their families is minimal. Almost daily we read of the health juggernaut wanting to free persons of whooping cough, measles, mental disorders, alcoholism, meningitis, golden staph, and the list goes on.

So the bad news is that in all those 2270 words the word “ice-free” or the phrase “freedom from ice” do not appear. 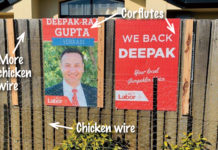