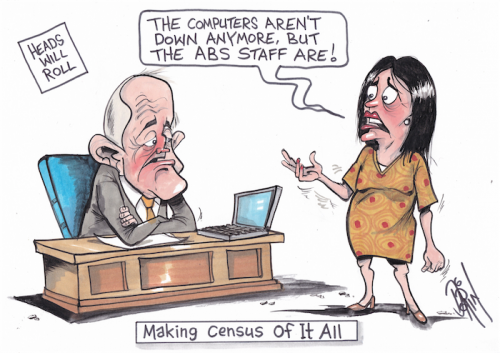 WHO’D have thought it was so difficult?

The government has been collecting Census data since 1911 with barely a glitch. But in the whiz-bang world of cyberspace, suddenly it was a shemozzle. And worse, everyone blamed his or her favourite bogeyman… which is perfectly understandable for banter around the water cooler, but not on our own ABC and certainly not from Canberra bureau chief Greg Jennett who, without any attribution (much less evidence), blamed “the Chinese”.

It was not what we’ve come to expect from the likeable and thoroughly professional Jennett. In fact, according to the experts, it was the work of home-grown privacy activists.

HE’S not alone in his anti-Chinese attitudes. Treasurer Scott Morrison vetoed the sale by his fellow Liberals in the NSW government of the state’s electricity poles and wires to a Chinese company on grounds of “national security”. Fearing, no doubt, that they would, um, well, who knows?

ON the other hand, Chinese swim fans undoubtedly choked the social networks of Aussie swimmer, Mack Horton who branded his rival Sun Yang a drug cheat before besting him in the 400 metres. And our Olympic officials, quite properly, backed him to the hilt.

STILL on the Olympics, it’s been a joy to watch our swimmers’ behaviour this time around. In London the team was dominated by a bunch of thugs. Today’s team is filled with thoughtful uni students with another string to their professional bows, a really heart-warming development.

BY contrast, the revelations by “The Guardian” in leaked documents showing the scale of abuse and trauma inflicted on children in detention on Nauru were chilling.

CLOSER to home, Lib Leader Jeremy Hanson turned up the heat on the Barr-Rattenbury government with his promise to use the money they would spend on light rail for a new $395 million hospital.

“This is a flagship election commitment to make our health system the envy of the nation,” he said.

In response, CM Andrew Barr promised daily, low-cost flights between Canberra and Melbourne that would inject $17 million and 100 jobs into the community.

STILL on election promises, Barr seems determined to back the renovation of Manuka Oval and surrounds despite protests from the heritage activists.

A community panel will make recommendations and the GWS proposal will remain in the mix.

“The masterplan will include parking and how the oval could be better connected with Manuka, Kingston, the Foreshore and Telopea Park,” he said. “Any development will need to be high quality and sympathetic with its surroundings.”

FINALLY, a surprise highlight of the Olympics was undoubtedly the Rugby Sevens.

Our girls were brilliant and deserved their gold. But nothing could compare with those Fijians who made a meal of the Brits in the men’s final. In fact, their warrior fans looked to be firing up the pots for a feast on the leftovers!