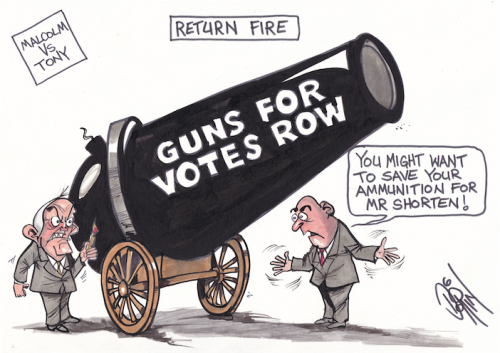 IT’S on! The Turnbull-Abbott feud finally burst on to the public stage this past week as the PM slapped down his predecessor over Tony Abbott’s ridiculous claim that he knew nothing about the deal his government did to water down gun control to secure a vote from Senator David Leyonhjelm.

Malcolm Turnbull let fly at Question Time: “I have made inquiries and can say to the House I’m satisfied that the Minister for Justice [Michael Keenan] acted in the full knowledge of the Prime Minister’s office at that time.”

Abbott then claimed to have been misrepresented and couched his complaint against the Labor questioners.

But here’s the crazy part – the vote they’re chasing is for the ABCC, the building industry’s “cop on the beat”, and the right-wing Senator would have voted for it anyway.

The good news is that, at last, Turnbull has shown a bit of spunk.

SPEAKING of factional battles among the Libs, the fight is on in the ACT over the moderates’ objection to Alistair Coe’s leadership ambitions as “a step too far to the right”. Here at Seven Days we hear that regular party members are more concerned that it would be “sending a boy on a man’s errand”.

But what a joy it is that half the successful candidates are women. Once again Canberrans are taking the lead in social progress. Labor’s new deputy, Yvette Berry, has the firm backing of her leader; surely the Libs can do better than another bloke to fill the deputy’s role? Perhaps one of the bright new women such as Elizabeth Lee should be given the chance to grow into the job. After all, it’s four years till the next election.

ACROSS the seas, Daffy Donald squawked his swan song in the final debate and captured the headlines with his refusal to accept the result “unless I win”. The peaceful transfer of power is the unique genius of our democratic system and the US pundits went into meltdown. But really, on November 9 that cox-combed rooster will be just another feather duster.

THE “New York Times“ was on firmer ground when the editorial board slammed successive Australian governments this week for their treatment of refugees.

“Australia’s inhumane imprisonment of desperate people is a disgrace,” it thundered. “The government should end its offshore processing of refugees and stop treating anyone who approaches its borders without a visa as automatically inadmissible.”

They were joined by Amnesty International’s damning account, “Island of Despair” and a heart-rending “Four Corners” report. Even Tony Abbott has conceded that Labor’s “Malaysian Solution” is the best way forward. Time the PM swallowed his political pride and followed suit?

HARD to feel sorry for gambling kingpin James Packer whose Crown casinos have been hard hit by the arrest of 18 employees and a $630 million collapse on the stock exchange. Clearly he took a bet that Chinese President Xi Jinping’s crackdown on corruption and money laundering would leave his big-betting Chinese “whales” untouched. Fat chance, Jimmy.

SPEAKING of whales, this last week at Tuross, happy campers and regular visitors have seen an endless parade of the mighty cetaceans gambolling their way south with offspring in tow. S-o-o-o good for the soul…