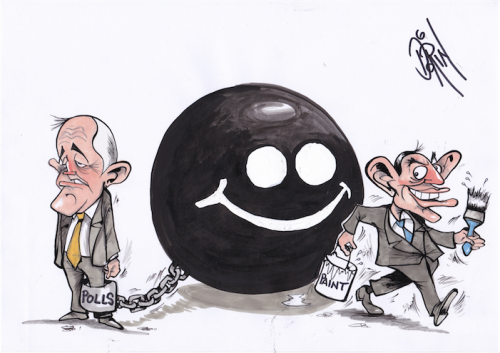 DECISIONS, decisions – 2016 is undoubtedly a vintage election year, especially for Canberrans. And the closer we get to October 15 the more interesting the local poll is becoming. In fact, it now looks like a toss-up.

Unfortunately, we don’t get to vote for the Leader of the Free World. That, sadly, is left to the Americans where a big chunk of the electorate won’t even bother. If Canberrans were given their say, the first great debate would have had us falling over ourselves to send Daffy Donald back to his flashy, trashy, penthouse.

That he has come so far is a frightening commentary on the democracy that the Americans say they prize so highly. And even after that appalling performance, the highly qualified Hillary Clinton is leading by only six points! What are they thinking?

NOT that we’re doing so great in our own version of democratic governance. The same-sex marriage imbroglio has highlighted the weakness at the centre of our situation and its name is Malcolm Turnbull. The PM is leader in name only while Christian extremists such as Cory Bernardi and George Christensen act as stalking horses for you know who. When asked this week, Tony Abbott said his leadership ambitions were “dead, buried and cremated”. Yep, just like Work Choices and the GST.

IN our own beloved ACT, the Liberals are throwing everything but the kitchen sink at the Barr-Rattenbury Government in their attempt to reclaim the Treasury benches.

They’re now calling into question government payments to UnionsACT for work health and safety services. They want the auditor-general to investigate funding of about $120,000 annually for the last 13 years without competitive tender.

Originally, the payment went to a qualified officer within the UnionsACT. But now, they say, it’s been subtly altered to a “policy and research role” filled by a Labor Party insider. Small beer, perhaps, but not a good look. And when combined with the auditor-general’s report into the government’s Land Development Agency, it all adds to the sense of sleaze at the edges.

THE same goes for political donations. It’s one thing for CM Andrew Barr to ban contributions from developers, as he promised. But why stop there? How about the unions? And what about the clubs that are making such a fuss about a few pokies in the casino?

QUITE a shock when the entire state of SA was blacked out by a storm that blew over high-voltage transmission towers and lightning struck a power station. Malcolm Turnbull accused state and territory Labor governments of being “dangerously preoccupied” with renewable energy.

This, of course, is the same renewable energy designed to slow the global warming that causes the massive destructive storms. But the states and the Commonwealth certainly must increase the pace of security engineering in the grid.

THIS week’s column comes from Brisbane, the old home town, where we’re spreading the word of our Hamilton Hume biog. When I left the “Courier-Mail” all those years ago to seek my fortune in the south, the idea of emailing a weekly column from anywhere in the world was quite unthinkable. Many despots remain, but the Tyranny of Distance is gone forever.