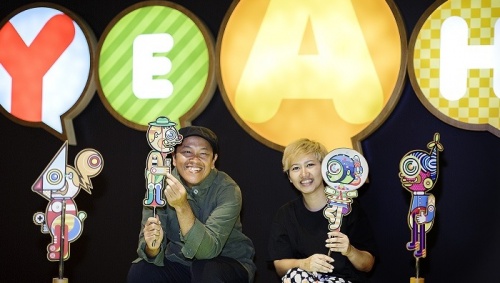 Bawono and Ariestyowanti in ‘Yeah Gallery’.“NGA Play”, the coolest spot in the National Gallery of Australia, has just become that bit cooler with the arrival of Indonesian art duo Santi Ariestyowanti and Miko Bawono, known as “Indieguerillas”.

The artists, who both trained at the Indonesian Institute of the Arts in Yogya, were spotted a year ago in Singapore by deputy director of the NGA, Kirsten Paisley, who promptly invited them to visit Canberra to get an idea of its youth culture and view the gallery’s extensive Indonesian art collection. She then commissioned them to create an interactive family space at the gallery.

The result, just near the entrance foyer to the NGA, is an over-the-top suite of fun installations that owe a lot to the traditional Javanese forms of “wayang kulit” puppet theatre, “wayang beber” storytelling scrolls and “wayang golek”, Sudanese wooden puppets.

“We are repositioning our art to become the art of the common people,” Bawono told “Citynews” today, adding that while the heroes of the ancient wayang kulit were refined characters drawn from the nobility, theirs were more down to earth, especially in their representations of themselves as the wise-cracking, truth-telling servant clown characters known as “Punakawan”.

Urged by Paisley to provide art that would make a practical impact on Australian children and confront issues like obesity, Ariestyowanti and Bawono have created spaces where children can use their digital skills to jump and bound, grabbing images of food from the screen and trashing them both physically and digitally. All this happens in a room modelled on Van Gogh’s bedroom – “We can teach some history of visual arts too”, they say.

Bawono says obesity is just as big a problem for Javanese kids – “They’re too involved with their gadgets,” he notes.

Elsewhere in the “Yeah Gallery” is a colouring wall inspired by two 19th century batik works from the NGA’s Indonesian textile collection, with coloured crayons at the ready. In the centre of the same space are crayons, paper and scissors ready for creating 3D paper toys and puppets.

There’s also a bicycle inspired by Indonesian food-carts which, when ridden, will activate a “wayang beber” scroll-like screen hinting at works in the NGA by Andy Warhol, David Hockney, Wassily Kandinsky and Roy Lichtenstein. A second bicycle triggers the sound of an Indonesian gamelan orchestra and some flashing lights if people pedal hard enough.

Ariestyowanti and Bawono are part of a distinguished trail of exchanges between Indonesia and the gallery, not least in the installation in the Sculpture Garden pond of sculptured heads by Dadang Cristanto and the presentation, personally, by the Sultan of Yogyakarta, of the batik collection to the NGA.

The pair head back to Yogya tomorrow, with a possible residency in Germany looming, but have enjoyed not just creating the fun gallery but exploring the Australasian national collection. Their favourite works? Batik pieces held in the textiles collection depicting scenes from World War II.

Indigeuerillas, in the “NGA Play’”space until May 13. “NGA Play” is developed with the support of NGA Council member Tim Fairfax in memory of Betty Churcher.