DANCER, choreographer, hotshot CEO, mother, teacher and former Artist of the Year, Padma Menon, is about to take a flying leap into the future with a venture she calls “Moving Archetypes”.

With the idea of providing an experience that is “creative, empowering, connecting and reflective”, she is embarking this month on a series of workshops aimed not at professional dancers but creating an oasis for ordinary people in the chaos of modern life.

It’s a far cry from the life of a woman who began studying dance in early childhood.

When Menon swept on to the Canberra dance scene in the early 1990s, her appearance was transformative. Armed with a 15-year-long training in the Kuchipudi style of southern India and an academic interest in Shakespeare, she single-handedly formed a multicultural dance company, carved out an audience for Indian dance and successfully sought out funding from the ACT government to stage high-quality performances in places such as the ANU Arts Centre and The Street Theatre.

That was the heyday of dance in Canberra with Meryl Tankard and her dancers operating out of Gorman House, Elizabeth Dalman breaking the boundaries of dance at Mirramu on the shores of Lake George and Menon digging deep into the collective unconscious.

So unusual was her work, which employed non-Indian dancers from Canberra, that her Kailash Dance Company was invited to the “Soorya” dance festival in Menon’s home state of Kerala, India, an event that I was privileged to attend. Respectfully reviewed by the top critics in India, it nonetheless raised eyebrows for its multiculturalism.

No wonder then that when, in 1994, Menon was named Artist of the Year at the annual ACT arts awards everyone assumed that she was a mature age artist, but in fact she was only in her early 20s.
Encouraged by the government funding body, Menon created an abstract contemporary work called “Agni” (fire), collaborated with Tankard in the production “Rasa” at the Adelaide Festival and joined local flamenco dancers in a cross-cultural venture.

Audiences accustomed to the colour and ritual of her early work vanished and, after giving birth to a daughter, she too vanished, moving to the Netherlands with her partner. There she was to study for a Masters in Laban Movement Analysis and to meet some of Europe’s foremost experimenters in dance.
She continued to work on the stage directing “Rudra” based on the Vedic Indian god and “Ophelia” based on Shakespeare’s character, also venturing a work that fused Lady Macbeth and India’s Bandit Queen Phoolan Devi.

The pull of India was great and, in 2006 with two children, she founded the Mudra Centre for Dance in Kochin, Kerala, attracting people without previous dance experience and partnering with human rights organisations and women’s shelters.

Eventually Menon returned with her children to make her home in Canberra, taught dance for a while and then became a formidable executive in non-government organisations that dealt with multicultural and immigration issues.

Turning to the study of counselling, she focused on western psychological theories of archetype (Jung comes to mind) and devised her own approach to self-awareness, supported by training in yoga theory and practice, Indian philosophy, western dance, Butoh and the Indian martial art form of Kalaripayattu. Archetypes, she believes, can be useful to us in our daily lives.

Menon rejects the idea of “closure,” since all life involves change. Rather, through the studies of archetypal characters such as Kali, Buddhism’s Green Tara, Cleopatra and Siva, “complex characters from myths, legends and literature,” she hopes her classes and individual tutoring sessions will help people have a sense of their own space, making them less isolated.

If this sounds a bit New Age, Menon is adamant that it’s not. Her idea is to work through ancient traditions of movement, using dance to connect and allowing those who participate to feel “liberated.”

“Moving Archetypes” with Padma Menon, free introductory workshop, Currie Crescent Community Centre, Kingston 10am to 11am, Saturday, February 11. Regular workshops start from Tuesday, February 14, and will run weekly on Tuesdays and Saturdays. Inquiries to tpadmamenon@gmail.com or 0447 643 646. No previous experience of dance is necessary. 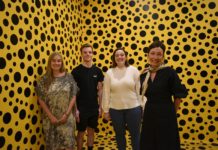