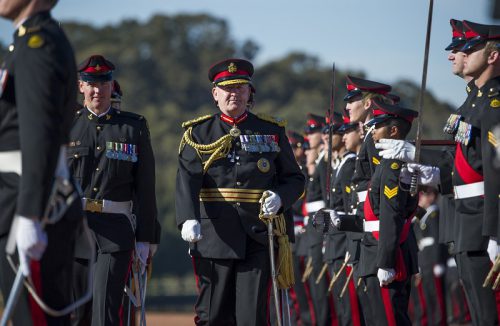 THE Corps of Staff Cadets, together with the Band of the Royal Military College, presents the spectacle of the Trooping of the Queen’s Colour at Gallipoli Reach on the foreshore of Lake Burley Griffin. This parade, reviewed by Governor General Sir Peter Cosgrove, celebrates the official birthday of the Queen. The ecent begins at 10.15am on Saturday, June 10. All are welcome.

MUSE Café in the East Hotel, Kingston has the World Gin Day Dinner on Saturday, June 10. And then on the Sunday, from 3pm-4pm, Kim Mahood will have a conversation with Louise Maher about the fault lines between black and white relations in Australia. Bookings to musecanberra.com.au

THE Snowy Mountains’ coolest music event, The Peak Festival, is coming up again this June long weekend with over 30 artists and around 120 performances across 10 live stages throughout the Perisher Resort. Inquiries and bookings to peakfestival.com.au

CASP is an annual small grants program administered by Regional Arts NSW on behalf of Create NSW Arts and Health. Its focus is on arts and the environment, Aboriginal and Torres Strait Islander projects, culturally and linguistically diverse projects and projects by children or young people. CASP Grant writing workshops are open to applicants at southerntablelandsarts.com.au until 5pm on Thursday, July 27.

CIT Adult Short courses are held every first weekend of the month all year round at Canberra Glassworks. Costs apply and to find out more, email education@canberraglassworks.com.au

THE Karabar Open Spaces project, “Mosaic seats”, is a project to help mosaic some seats in Queanbeyan. No previous mosaic experience required, register at qcc.nsw.gov.au and turn up at the corner of Southbar and Candlebark Roads on Thursday, June 22, Friday, June 23, Saturday and June 24, Sunday.

THE second “Girls Rock! Canberra” camp is running during the winter holidays. The five-day program is open to girls, trans and non-binary youth between ages 10-17 years. Last year there were 42 participants and 35 mentors. To be held at Ainslie Arts Centre from July 10-15. Applications to girlsrockcanberra.com by June 11.

M16’s Writer in Residence Program 2017 is a supported residency for emerging writers with an interest in the arts. It offers an emerging writer the opportunity to develop their writing practice, publish their work, contribute to the critical discussion of Australian contemporary art, particularly in Canberra, and work closely with a small arts team. To apply submit an example of your arts writing (review, essay, etc.) no longer than 1000 words and a CV by 5pm Friday, July 28 to marketing@m16artspace.com

CANBERRA Glassworks is seeking help to allow local artist Peter Nilsson to engrave three panels of glass for “Huldra”, a giant outdoor engraving project for the Winter Glass Market on June 17. The finished work “Lady in the Green Dress” by Peter Nilsson, valued at $11,000, will be raffled at the market to raise funds for the Creative Fellowship and other artistic programs. Tax deductible donations by June 9 to pozible.com/project/bringing-huldra-to-life 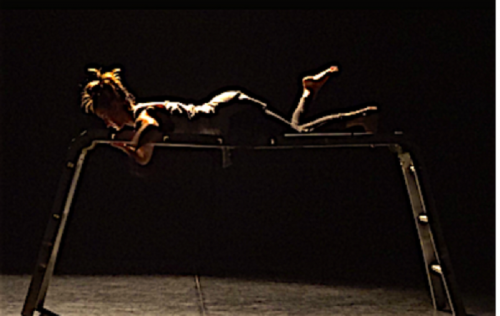 “CONTACT” is a new contemporary dance work choreographed by 22-year-old Jack Riley, a graduate of QL2 and the Victorian College of the Arts. The work looks at the impact of personalised objects and technology on our bodies. At QL2 Theatre, Gorman Arts Centre, 55 Ainslie Avenue, Braddon, 7pm, June 9-10. Bookings to eventbrite.com

ALISON Plevey and the Australian Dance Party need your vote for a Bendigo Bank community grant to help them create a full length work in 2017. Voting to facebook.com/canberracommunitybankbranches/ or directly by email to Chloe.Heath@bendigoadelaide.com.au

“ENIGMA”, a new exhibition by local photographer Lorna Sim, is at The Photography Room in the Old Bus Depot Markets running to June 25. The exhibition presents the form and free spirit of Eliza Sanders, a young contemporary, award-winning and independent dancer, choreographer and visual artist. Admission is free.

PADMA Menon’s next course focuses on the popular Buddhist and Indian archetype, “Green Tara”, who represents freedom from eight fears including pride, doubt and anger. The dance focus in the six-week course will be a combination of Indian and western styles and will also include guided reflection through movement. Info at movingarchetypes.com.au

THE fifth Winter Film Series will soon be back at the NGA. Curated by Simon Weaving, now a lecturer at the University of Newcastle, the high points this year are new docos about medieval painter Hieronymus Bosch, fashion designer Dries Van Noten and enigmatic artist Joseph Beuys. At the James O Fairfax Theatre, 6.30pm, June 7-July 5. Bookings to nga.gov.au or 6240 6701.

THE Persian Film Festival will run again from August 31 to September 10. It showcases films from Iran, Afghanistan, Tajikistan and the Persian-speaking diaspora, with awards for “Best Feature”, “Best Documentary”, and “Best Short Film”. The festival will feature Q&As and masterclasses. For terms and conditions and to submit films visit persianfilmfestival.com 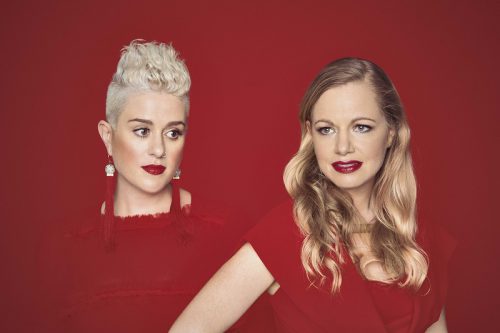 KATIE Noonan and Karin Schaupp join in “Songs of the Latin Skies”, which is their stunning take on the great South American songbook of bossa nova, samba, salsa and tango. At The Street Theatre, June 9 and 10. Bookings to thestreet.org.au or 6247 1223.

“APIA Good Times 2017” sees The Black Sorrows on stage with Vika and Linda Bull, Colin Hay, Deborah Conway and Mental as Anything. At Canberra Theatre, Sunday, June 11. Bookings to canberratheatrecentre.com.au or 6275 2700.

THE next free concert at the High Court of Australia will feature COZMO, Capital of Australia Mandolin Ensemble. At 1pm, Sunday, June 11. Registrations to hcourt.gov.au

CHILDREN’S entertainer, Peter Combe, who created the timeless children’s classics “Wash Your Face With Orange Juice” and “Spaghetti Bolognaise”, returns with “Live It Up”, at Canberra Theatre, noon, Saturday, June 10. Bookings to canberratheatrecentre.com.au or 6275 2700.

AN enchanted evening is guaranteed by Queanbeyan Players with its new production of “South Pacific”. The Q – Queanbeyan Performing Arts Centre, to June 11. Bookings to theq.net.au or 6285

“WE’RE up to our old tricks again with another Agatha Christie,” says Tempo Theatre director, Jon Elphick. Yes, it’s their ninth one. In “Verdict” we meet the Hendryks, refugees whose serenity is shattered when there’s a murder… and a verdict. Theatre@BCS, Belconnen Community Centre, Swanson Court, to June 10. Bookings to canberraticketing.com.au or 6275 2700.

NEXT up in the Street Theatre’s “First Seen” series of dramaturgical workshops is Heidi Silberman’s play “White Tulips”, which is described as an intimate tale of two sisters battling over memory, responsibility, and truth. Directed by Jordan Best, the workshop will feature actors Anna Riddel and Emma Strand. At The Street, 3pm, this Sunday, June 11. Bookings tothestreet.org.au or 6247 1223.

BEAVER Galleries has two new exhibitions: Nicole Ayliffe’s exploration of the optical qualities of glass through transparent glass forms; and Bruno Leti’s monotypes, for him the perfect vehicle to explore the ways in which his oeuvre as a painter and printmaker overlap. 81 Denison Street, Deakin, Tuesday to Friday 10am-5pm and Saturday to Sunday 9am–5pm until June 25.

AN exhibition and sale of Margaret Ballard’s “Works in Resin” is now on show at Kyeema Gallery, 13 Gladstone Street, Hall Village, from Thursday to Sunday, 10.30am to 5pm, until June 12.

“BABY it’s cold outside” is a celebration of all things frosty, by Queanbeyan-Palerang artists, showing what winter means to them. At The Q, Queanbeyan, May 25 to June 19.

NANCY Sever Gallery has an exhibition of recent paintings by the Melbourne artist John Scurry, whose last sixteen years were as a senior lecturer at the Victorian College of the Arts, where he was a former head of printmaking. John says his paintings come from an impulse to depict. Kennedy Street Kingston, Wednesday to Sunday 11am to 6pm until July 2.

THERE are currently two exhibitions at the Canberra School of Art. One features printed textiles from the Babbarra Women’s Centre in Arnhem Land. Items for sale can be bought through the gallery office. The other is an exhibition of works from a collection of people at ANU who have worked in communities. The exhibition includes work from artists such as Howard Morphy, W E Stanner, Louise Hamby and Valerie Kirk and others.

THE Belconnen Community Gallery “RESPECT” series’ Reconciliation Week show is a group exhibition by participants in the Bungee indigenous boys and indigenous girls groups, parents from the Koori Kids program, and professional Yidinji artist, Greg Joseph. All works will be displayed at the Belconnen Community Centre, Swanson Court, until June 9, 9am-4.30pm, Monday to Friday. 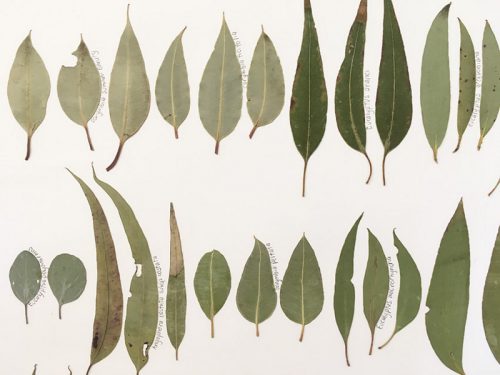 “THE Colour of Eucalyptus” is a solo exhibition of eucalyptus colour specimens and artworks by Sally Blake at the Australian National Botanical Gardens Gallery, until June 25. Trained in the textiles workshop at the ANU, Blake uses her sensitivity with materials to create artworks that explore these dyes on a range of natural fibres and threads. Blake will run eucalyptus dye workshops in conjunction with the exhibition at the ANBG on June 11 and 18. Inquiries to anbg.gov.au/gardens

“KIRSTIE Rea: the land”, a 20-year survey of works by one of Canberra’s most famous glass creators, has been chosen for the reopening of the Canberra Museum and Gallery. The show runs to August 20. Floor talk by Rea, 1-2pm, June 8 all welcome.

“THIS Way” is an exhibition at Watson Arts Centre of new works in wax and clay by 2016 EASS winner, Heidi Strachan. The show runs to June 11, 10am to 4pm, Thursday to Sunday, Aspinall Street Watson.

THE U3A Camera Club is presenting its second “Click + Capture” exhibition at Strathnairn Arts in Holt to Sunday, June 11. Together twenty-one photographers, members of the U3A Camera Club, reflect their diverse styles, backgrounds and interests in a showcase that includes flora, fauna, wildlife and city life.

“MELODRAMA in Meiji Japan” Japanese woodblock (Kuchi-e) illustrations at the Exhibition Gallery on the ground floor of the National Library of Australia. From 10am-5pm, to August 27. Free, no booking required. THREE photographic artists are now exhibiting at The Photography Room in the Old Bus Depot Markets. Dörte Conroy’s “What Comes to Mind”, Lorna Sim’s “Enigma” and Maurice Weidmann’s “Absence of Sunshine” can be seen to June 25.

“EXQUISITE Nature” is a show of neon artworks by Emilie Patteson and Harriet Schwarzrock that has been curated by Aimee Frodsham. Patteson’s work is grounded in collecting and preserving plant material within glass, while Schwarzrock is known for her bold, bright use of text and neon installations. Suki & Hugh Gallery, 38A Gibraltar Street.

M16 artspace has: “The age of meaninglessness has ended – Art, Empirical and Ideal”, paintings by James Rowell; “The Darkness Torch” by Louisa Giffard, investigating the difference between additive and subtractive media; “The Elm Forest” curated by Hannah Webb, bringing together collaborative and solo works by artists Janet Angus and Fairlie Pearce; and “Labyrinths of the Mind”, recent paintings by Sholto Morton. At 21 Blaxland Crescent, Griffith, 12pm-5pm, Wednesday to Sunday until Sunday, June 11.

“SCULPTURE on the Campus”, at Canberra Grammar School, 40 Monaro Crescent, Red Hill, until Saturday, June 18. Members of the public are welcome throughout the festival season.

THE National Photographic Portrait Prize 2017 will be on display at the Portrait Gallery to June 18. The exhibition will then tour. The final works were selected from a national field of over 3000 entries from amateur and professional photographers. The finalists include photographers from every state and territory except Tasmania.