Mr Barr surprised those present by predicting that the 7-year-old Autumn event would eventually “easily surpass” Floriade, in spite of early criticisms of the Government’s initiative when setting up the event.

He pointed to the partnership this year with Singapore Airlines, whose representative, Karl Schubert, was on hand to talk up the attractions of Canberra by night for Asian visitors taking advantage of the Capital Express flights to see our major buildings “in a d 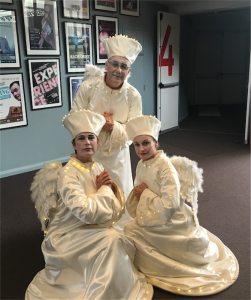 Helena Cataldo from EventsACT, clad in angel’s wings, described the coming festival as “nice”, while  creative director of “Enlighten”, Nicole Warren, announced the return of the Night Noodle Market, the commissioning of six new “Electric Canvas” projections on national buildings and an overarching theme of “freedom, flight and feathers” that would rage us into other realms.

“Enlighten” 2017 will take place around national buildings and the Parliamentary Triangle from March 3 to 13. Bookings from tomorrow February 1 to ticketek.com and program details at enlightencanberra.com.au