It’s a great experience for visitors and a good place to start is by collecting the information sheet “What is in Flower this Week” from the visitors’ centre.

The plant trail is a popular attraction for children, taking in the rock garden and pools, where the water dragons bask on the rocks and dive into the water.

Wandering the Red Centre Garden is like being in the bush, out from Alice Springs, in Central Australia, with spinifex grasslands, ghost gum woodlands and saltbush scrub.

The unique Sturt’s Desert Pea grows in the microclimate of the Botanic Gardens, but will not survive in an ordinary Canberra garden.

Still one of the most exciting attractions is the Rainforest Gully with its boardwalks and “dinosaurs”.

One of the most exciting developments due to begin this year is the construction of the 15-metre-high Ian Potter National Conservatory, a $6 million project due for completion in 2018.

ON the South Coast is the Eurobodalla Regional Botanic Gardens, seven kilometres south of Batemans Bay on the Princess Highway, which features a wonderful range of native plants from the Shoalhaven region from Ulladulla to Eden.

One of the features is the Rock Garden replicating the Shoalhaven River. Paths wander in a series of walks with signs and animals to keep children occupied.

The gardens are open every day during school holidays and the kangaroos there would have to some of the friendliest in Australia. Also look out for the giant goannas.

FINALLY, consider a visit to the National Arboretum with its collection of 100 forests of rare and endangered trees from around the world.

While very much in its early stages, one can imagine how it will look in a few years time. Also on display at the arboretum is the National Bonsai Collection with many specimens on loan from around Australia. 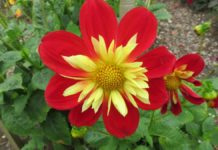 CityNews - December 1, 2020
0
With summer underway, Canberra paramedics are warning the community of heat-related risks, even when temperatures are below 30C.

Journey through the world of tea, sip by sip