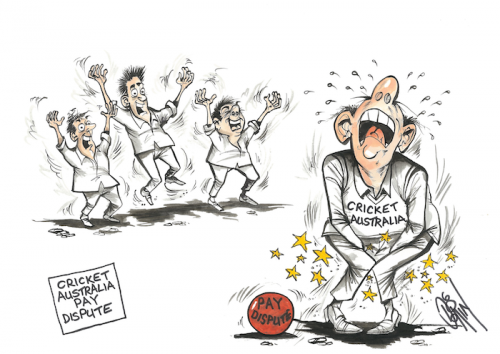 THE craziest year I have encountered in providing sports media coverage in Canberra was 1995 – the year the Super League war broke out and the Raiders were in the middle of the hostilities.

I vividly remember receiving a call the night after the Raiders played in Townsville, where Canberra players were called, one by one, into a hotel room and offered huge money, in many cases more than double what they were currently earning in the ARL, to sign with News Limited.

The landscape changed overnight. Many players, openly displaying their new-found wealth, felt that at last they were being rewarded for putting their bodies on the line week in week out.

However, the public reaction was the polar opposite as they struggled to comprehend how players had gone from what appeared to be “playing for the love of the game” to talking about money and “their brand”.

For the first time, fans really turned on the players. Sure, you get plenty of flack after a loss, but this was different as supporters accused the players of being greedy.

It has taken rugby league many years to recover from the Super League war. In some cases, die-hard, rusted-on fans have never returned.

If there is one thing that needs to be learned from the past it is that average, ticket-paying fans find players talking about the need to earn more money a major turn off.

Another consideration is that fans go to games under the belief that a desire to play for the Raiders and not money is the main motivator for the players to perform.

Nevertheless, with the amount of money coming into the game I think players deserve a fair share of the revenue generated by what they do on the field – so long as the league can afford it.

Players certainly work hard, with the physicality of the sport guaranteeing a shortened playing career and the long-term impact on their bodies precluding them from some post-sport career options.

In my mind there needs to be greater transparency from the NRL on what the revenue generated by the television deal, in particular, is used for.

With history in mind, the players need to tread a fine line as their current push for a greater share of the code’s revenue heads into the public arena.

The Players’ Association wants the salary cap increased to $10 million a season, a million more than is being offered by the NRL. And the association has every right to question where the money is being spent.

Talking to one player this week, he said the push for a larger salary cap was not because the leading players wanted bigger deals, it was so the wages of the lower-paid players in the 30-player squad were significantly increased.

The same argument is being presented by the leading cricketers in their revenue-sharing dispute with Cricket Australia with the push for more money for grassroots, women’s and Sheffield Shield players. The AFL Players’ Association is also in negotiation with the AFL over the salary cap with the association calling for a fixed slice of the revenue.

The argument has some depth because the leading players in all three codes are going to be well paid anyway. Last year in the AFL, six players earned more than a million dollars a season, in the NRL, five players are reportedly on a million a season, while in cricket the average wage for an international player is more than $1.16 million a year.

My point here is that players need to tread carefully. If it is perceived as a cash grab by the top players, history has shown it has the potential to backfire as a public relations exercise.

Instead, if it is pointed out by the leading NRL players that they are not so much seeking more money to boost their own bank balances but are doing it to increase the salaries of those in the bottom half of the 30-player squads, it would be far more palatable to the general public.

CityNews - March 5, 2021
0
The $13.5 million expansion of the Canberra Hospital’s intensive care unit is underway and will be complete by the end of the year, according to ACT Health Minister Rachel Stephen-Smith.