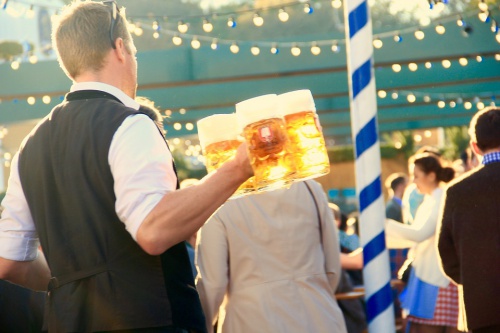 AFTER more than 50 years in Canberra the Harmonie German Club is moving Oktoberfest across the border to the Queanbeyan Showground following the crippling costs at EPIC last year, says club secretary Maria Hawthorne.
Ms Hawthorne says ACT government fees rose from $6000 in 2011 to $41,000 in 2016, for the same venue, which had no improvements.
The Harmonie German Club was approached by alternative venues interested in hosting Oktoberfest, including the Queanbeyan-Palerang Regional Council who Ms Hawthorne says has been very welcoming.
Ticket sales open today (July 18) for Oktoberfest Canberra 2017, the ACT region’s original and authentic celebration of Bavarian music, dancing, beer, food and German gemütlichkeit (friendliness).

“There’ll still be a tonne – literally – of pork knuckles, thousands of sausages, and more steins than you can count of authentic German beer,” Harmonie German Club president Kevin Bramboeck says.

“The Queanbeyan Showground is a great place for a party, as anyone can see from the Queanbeyan Show, the Rodeo, and the Winter in July Markets. And we’re making it easier than ever for people to get to Oktoberfest Canberra with buses to and from Civic, Woden, Tuggeranong and Bungendore.”

Oktoberfest Canberra was first held at the Harmonie German Club in Narrabundah in the early 1960s. The club was built and paid for by German settlers who arrived in Canberra in the 1950s and 1960s to build the national capital and the Snowy-Hydro scheme.

Oktoberfest Canberra is the club’s biggest fundraiser every year. Many community and sporting groups will contribute to the running and share in the profits of this year’s festival.

“Our German sausages are made specially for Oktoberfest by German butchers in South Australia’s Barossa Valley, and our pork knuckles are prepared by one of Canberra’s best German chefs, who volunteers his time.

“But of course, it’s not an authentic Oktoberfest without German beer, and our beer comes direct from Munich.

“This year’s beer, from the 400-year-old Paulaner craft brewery in the heart of Munich, can only be tasted at Oktoberfest Canberra and Munich’s Allianz Stadium during Bayern Munich FC games.”

CityNews - January 20, 2020
0
EIGHT hundred plants will be given away tomorrow (January 21) as the City Renewal Authority gives Civic's flower displays a seasonal refresh.