A RESEARCH guided plan of management for Eastern Grey Kangaroos in Canberra has been released today (May 11) following public consultation. 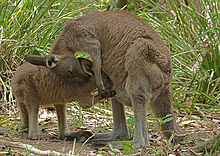 Conservator for Flora and Fauna, Dr Annie Lane says “The Eastern Grey Kangaroo: Controlled Native Species Management Plan” aims to maintain populations of the species as a significant component of the “bush capital”, while also managing their environmental, economic and social impacts.

“Heavy grazing by large populations of kangaroos can have a significant impact on native grasslands, woodlands and rural lands,” she says.

“In particular, heavy grazing impacts on other native species that live in these ecosystems, some of which are endangered, and on the kangaroos themselves in times of drought.

“Because the kangaroos are no longer kept in check by predators, such as dingoes and human hunting, we need to manage the kangaroo population.

“The plan sets out the background research and the policy, social and environmental context for maintaining kangaroo populations at the levels required to achieve conservation objectives in nature reserves and maintain economic viability of rural leases.

“The management approach is similar to the 2010 Kangaroo Management Plan, which has been guiding kangaroo management decisions in the ACT for many years, but focuses only on the Eastern Grey Kangaroo.

“The plan documents recent research and includes updates on current codes of practice. Unlike the current plan, this plan will be a statutory document.”

The plan was released for public comment in February and March this year and attracted 47 submissions.

It is available at environment.act.gov.au

Helen Musa - February 18, 2020
0
A night of spicy comedy is heading the The Q, in Queanbeyan, with an unusual line-up of comics across South-East Asia, reports HELEN MUSA.