Home arts Review / Poetry and performance is ‘a dangerous game’
Share Canberra's trusted news:
Facebook
Twitter
Pinterest
WhatsApp
IN the theatre physical action usually comes together with spoken word but this was not the case in Canberra Youth Theatre’s newest work, “Poem Every Day”, purportedly inspired by the poetry of Canberra’s Joshua Bell.

The co-directors of the production Katie Cawthorne and Tracy Bourne effectively admit this.

“Surprisingly, there is very little of the actual poetry of Joshua Bell throughout this piece… instead, we’ve responded to the ideas within the poetry, making comments about what it means to truly be yourself,” they say.

It proves a dangerous game, especially when most audience members were also furnished with a printed copy of the 12 poems used as inspiration or perhaps as a springboard for a date great deal of movement, writhing, emoting and physical slapstick that matches Bell’s poem “laugh loud/laugh often”.

Equally dangerous is the director’s decision to flout theatrical convention by creating “islands” of action – at one stage five separate areas – to which the unseated audience had to commute and make of the scenes what they could. This is the kind of cleverness that can drive audience members from the theatre, and it did.

At another juncture, the actors left the auditorium, creating a false ending. The joke was on the audience as there was more to come and, although the entire performance was not much more than 65 minutes long, it seemed to take for ever to conclude.

This is an exceptionally talented, radiant  ensemble of actors, well able to perform Bell’s poetry articulately and to fulfil the Pina Bausch dictum that “everything must come from the heart, must be lived”. 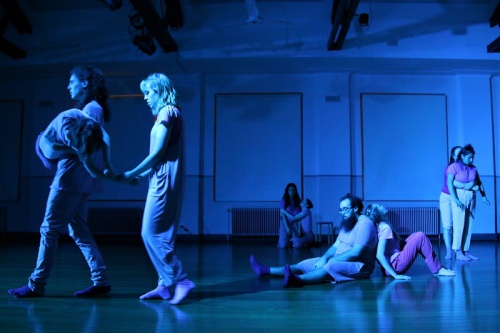 But the decision to play around with Bell’s poetry, selecting snatches of quotations and at one point dividing the lines of poems such as “Spill forth into the world/ooze between the cracks/travel the treadmarks” did little service to either him or them.

Bell’s fondness for reiterating key lines like “if I could…”, “Don’t hide your weirdness…”, “Laugh till…” invites theatrical exploitation, but this could have been done with more respect. His poetry, full of gentle acceptance of the vicissitudes of life, was ill-served by the aggressive stomping of Tadashi Suzuki’s theatre training or the verbal ejaculations of the cast, no doubt derived from improvisation sessions.

As expected from Canberra Youth Theatre, the production standards were very high indeed, with a discriminant use of particularly string music underscoring the action.

But in the end this proved to be anything but a collaboration between poet and performers.