LAST week marked the 179th anniversary of the official proclamation of Queanbeyan as a township.

No, that’s not a typo and, coincidentally doing the rounds at this time, is the rousing song penned to the town on the occasion of it turning 100 on September 28 all the way back in 1938, when Canberra was a mere bright, young thing.

The National Film and Sound Archive has been promoting “The Song of Queanbeyan” (hear it at nfsa.gov.au/collection/curated/australia-song) and other localised musical tributes that were a bit of a thing during this period. The usual suspects of Sydney and Melbourne make the list, though also odes to places such as Cootamundra, Braidwood and, of course, the most well-known “Along the Road to Gundagai” – considered one of the most popular of all Australian folk songs.

“Canberra is Calling to You” was another product of the era, today more recognised for having been trotted out for the Centenary of our capital just a few years back.

Queanbeyan’s song, composed in the year of the sesquicentenary (150 years) of European settlement, was actually commissioned as part of a competition for its impending local Centenary celebrations. Six entries were received and the winner was the importantly-titled Madame Evelyn Grieg, of Sydney.

A musician, performer and vocal coach, Madame Grieg was no slouch when it came to patriotic and parochial ditties. Among her repertoire, the World War I ballad “Our Boys” (“Boys in khaki from the Southern Cross, gallant lads in navy blue”), and the musical arrangement for the World War II’s “Battle Cry Australia” (“We fight for the Boomerang-land!”).

Both the Queanbeyan and Canberra songs (rather harshly described some years later by another publication’s columnist, who shall remain nameless to protect him from rebuke, as having a certain “engaging atrociousness”), were recorded by radio personality Jack Lumsdaine, who also wrote the capital’s version. Interestingly, the record label also noted they were both “Queanbeyan Centenary Songs”. As such, it’s difficult to let go of the fact that Queanbeyan, the raison d’etre, featured on the B-side (according to the “Urban Dictionary” – “the second and less important side, and therefore usually the less popular and worse song”).

The Queanbeyan Museum proudly boasts a copy of the “gramophone record” and states on its website that the much-valued contribution was accompanied by an equally invaluable anecdote:

“Donated by Mrs Roffe (Ruth); Mrs Roffe’s first job in 1941 was at 2CA. Feeling against Queanbeyan was such that when leaving the job, she was handed this record and told “here, you might as well take this with you”.

Certainly the significant turn-out and celebrations surrounding the big occasion for Queanbeyan in 1938 would attest to something different.

The festivities, which stretched over the last three months of the year, included a “grand procession and military display” featuring more than 30 floats symbolising “the town’s progress during the past 100 years”, the “crowning” of a fundraising “Queanbeyan Queen”, and it wouldn’t have been Queanbeyan without a huge sports carnival to round things out.

Guests of honour for the Centenary Dinner were no less than Australia’s 10th Prime Minister Joseph Lyons and his wife Dame Enid, the Premier of NSW Bertram Stevens and Mrs Stevens, and various other highfalutin’ Federal and State cabinet ministers. The Mayor of the time, John Esmond, a popular local businessman with a car dealership people still remember, would no doubt have taken great delight in having “The Song of Queanbeyan” performed for visitors to the fair – and well-established – town.

In the intervening years there have been other songs specifically dedicated to the heart of our nation, including another apparent Queanbeyan rip-off in the “Song for Canberra” in 1981: it was not quite so sentimental as those 1938 anthems though there may have been some dispute that the accompanying, somewhat twee video was, as suggested, “a community service”.

Not that it was quite as awkward as Judith Durham’s “Australia’s Canberra” in 2012, which opens to the sound of gleeful kookaburras before descending to lyrics featuring “kangaroos grazing round the monuments… platypi livin’ on the edge of Burley Griffin”, let alone wombats visiting the embassies!

Then again, there was also that civil rap war between Canberra’s Coda Conduct and Queanbeyan’s Macho Duck in 2015, but that’s a story for another day.

The Song of Queanbeyan 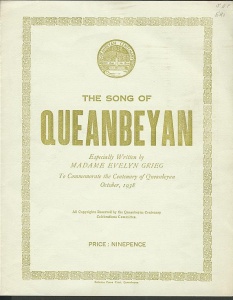 At set of sun when day is done,

and night is drawing nigh

The old folk sit at the open door

and talk of days gone by

Then Grandad tells how long ago

when he was a young bushman

He founded a homestead on the plain

at a place called Queanbeyan

the land was rich with game

With humble spear he fished the stream

before the whiteman came

And right here where I built my home,

And the stately emu used to roam

beneath the blue gum tree

A century has passed since then,

With changes wrought by man

But still I find it wondrous fair,

My home in Queanbeyan

Is the place where I belong,

And as I roam the hills and dales,

You will hear me sing this song.

I always long for you,

The open plains, the golden grain,

beneath the skies of blue,

Tho near or far where ere I roam,

I’ll always come back to the dear old home 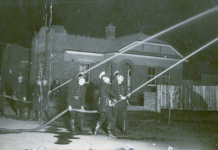