Home arts Arts / ‘Humble’ Viggers writes about place
Share Canberra's trusted news:
Facebook
Twitter
Pinterest
WhatsApp
ONE of Canberra’s hottest properties on the literary front is Karen Viggers, but international success has neither gone to her head nor made her wealthy.

A serious novelist with works like “The Stranding”, “The Lightkeeper’s Wife” and “The Grass Castle” behind her, she is about to see her newest work, “The Orchardist’s Daughter”, published by Allen&Unwin in Australia and by Les Escales in France.

Viggers will be a guest at the coming Canberra Writers Festival opening this weekend, joining a huge line-up that will force patrons into hard choices, since many comparable authors are timetabled at the same time.

But first to the dimensions of her success, cause for rejoicing in Canberra’s literary community for the terrific example it sets, although Viggers herself is more modest, saying, “being a novelist is so random”.

Her book the “The Lightkeeper’s Wife” (“La Mémoire des embruns” was picked up a couple of years ago by a small publishing house in France owned by a dynamic woman called Véronique Cardi, now directrice générale of the paperback publisher, Livre de Poche.

It sold 25,000 copies but then they bought it a second time and got behind it in a massive way. As well, French literary legend Gérard Collard, who has a weekly book program on French TV, named it one of the “books of the summer” in 2016 and Viggers as “one of the most important writers of the beginning of this century”. It sold 100,000 copies but sales have now risen to somewhere between 500,000 and 800,000.

In 2016, it won the Les Petits Mots des libraires literary award in France for a “discovery” novel and was short-listed for the Livre de poche “reader’s choice” award, remaining on the French national best-seller list for 42 weeks and becoming a number one bestseller on Amazon.

“It was recognition I’ve never had and it’s great to get some acknowledgement of my writing,” Viggers tells “CityNews”.

Be this as it may, she has no intention of giving up her one-day-a week job as a veterinary surgeon in an inner Canberra practice— she sees little from her huge sales and earns more from that one day than from all of her writing.

One of the disappointments to Viggers about her reception in Australia is that she has been marketed as a writer of “women’s fiction”.

“Over there my work is in the mass market, but is seen as literature,” she says.

“It’s a crossover between commercial literature and literary fiction… It hits the spot because it’s about the human condition and the baggage we inherit from past connections.

“It’s about courage and friendship and connections with the environment, in the end you can only be true to yourself.”

And it’s definitely not “chick lit”.

Writing, she says, is what comes out of you, so she writes about Australia, her love of landscape, (her husband David is a famous ecologist) and about the solace that can be found in nature.

“That is the substance of my work and any romance in my book is only as it connects to the larger story and a journey that the character is going on,” she says.

In “The Orchardist’s Daughter” there is no romance whatsoever.

It’s due out in February 2019 and when “CityNews” speaks to Viggers, she’s just sent the final copy and is waiting for the next stage. Set in the forests of Tasmania, it’s about two outsiders, Leon and Mikaela, who come in to a logging town in rural Tasmania.

Mikaela, who works in a take-away shop, has been brought up in a religious, controlling family which strives to keep her under their control in the familial tradition of protecting females.

The other outsider, the ranger Leon, was a secondary character in her earlier novel, “The Lightkeeper’s Wife”.

“He was an unplanned character who popped up and ended up with a life of his own, I wanted to follow him to the next stage, leaving Bruny Island and trying to establish himself,” she says.

“It’s been great following him and the other characters, but there’s no romantic entanglement, he is able to help the girl.”

She won’t name the actual town where she did her research, but says: “You have to spend time in the region, to understand the history of logging and it’s really important getting a feel for place, which is what I’m about.”

Like any writer with children, Viggers has to create silence and space to write, so she tries to work solidly for four days a week. One thing she does is to disconnect the internet, simply unplug it from the wall so that there is no temptation to stray. And she has a little fluffy dog who sits with her when she writes.

“I can be really disciplined, as soon as the kids leave for school, I’m into it,” she says. She likes be in contact with other writers, so may attends occasional workshops.

“You can get locked into your own perspective,” she says.

But she probably won’t be taking on larger tasks as she did a couple of years ago when she helped organise the Snowy Mountains Readers Writers Festival, of which she was patron.

“I probably took on more than I should have,” she says, “but it’s a wonderful little festival.”

There are a few ideas in her head about her next novel, but she needs a bit of a break. Before February 2019 of course there will be the process of translation, but that is handled by the French publisher.

“Around the World in 80 Trees”, Jonathan Drori will be in conversation with Karen Viggers, at the Museum of Australian Democracy, from 9.30am – 10.30am, Sunday, August 26.

Then, “Canberrans Taking on the World!”, will feature Cat Sparks, Dan O’Malley and Karen Viggers, who will all be in conversation with Dr Craig Cormick, at the National Library of Australia, from 1pm-2pm, Sunday, August 26.

Bookings for all sessions at the festival to canberrawritersfestival.com.au 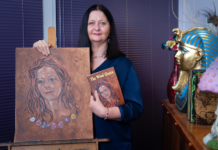 CityNews - January 23, 2020
0
THE ESA has released a map showing the extent and danger of two out-of-control fires around Canberra airport.