WHEN Queenie van de Zandt hits the spotlight at the AIS Arena next week in the Queen musical “We Will Rock You”, she’ll be playing to a home crowd.

For van de Zandt’s earliest theatrical triumphs were in Canberra and there is no reason to think this will be any different, especially since she gets to play the arch-villainess, Killer Queen – and who doesn’t love a wicked woman?

“We Will Rock You – The Arena Spectacular” is the brainchild of PeeWee Productions – lighting/sound guru Chris Neal, director Stephen Pike, musical director Ian McLean and publicist Coralie Wood – who hope to repeat the success of their 2015 arena production “Jesus Christ Superstar” by drawing in people to whom Queen and its late lead singer Freddie Mercury are nothing less than deities.

This time well-known Canberra director Kelda McManus will be at the helm.

Written by Ben Elton, and featuring more than 20 Queen songs, the show will feature a band of Canberra’s professional rock musicians, spectacular lighting, video content from the original UK production on LED screens, mammoth sound production and a multi-dimensional set.

Even if Ben Elton’s book is flimsy – “just a wonderful, kooky way to string together a lot of Queen numbers,” she says. “It’s tongue-in-cheek enough not to make you groan at the loose links.”

Killer Queen, she explains, is the CEO/dictator of a global consortium running the planet. Originally a video character, she needs to be made real.

When playing an arch-villain, she says: “It must be remembered that evil people don’t know they’re evil – she thinks she is the saviour of the planet.”

But she’s not perfect and Killer Queen has become a glutton, a good excuse to sing the Queen number, “Fat Bottomed Girls”.

And isn’t Queenie a great name to have when you’re playing in a Queen musical? Agreed, she says, but it gets even better. Her full name is Aquinia, handed down from a female forbear in the Netherlands, a nun named after Saint Thomas Aquinas.

Her theatrical credentials are impeccable. In Grade 2 she wrote a play that won a competition. Then at Daramalan College she sang and played roles in “West Side Story” and the musical “Time”.

Spotted by Bill Stephens, she and her schoolmates, pianist Peter J Casey and actor Bronwyn Mulcahy were inveigled into doing an Andrew Lloyd Webber show at the School of Arts Cafe in Queanbeyan – other shows followed, along with a stint at Stephen Pike’s Tarzan’s theatre restaurant and a chorus part in “Cabaret” at Rep.

She was cast in the Canberra Theatre production of “Annie” with Terence Clarke directing. His collaborator, the playwright Nick Enright, came to see the show, noticed her and intervened to get her two auditions which saw her firmly on stage in Sydney.

She would return to Canberra on a number of occasions to perform at The Street Theatre, but all the while she was writing. Actor/writer Tony Taylor engaged her to co-write a Christmas revue, “Jingle Belrose” at Glen Street Theatre in northern Sydney, and while working with him, her now-notorious stage persona, the inept Dutch musical therapist, “Jan van de Stool”, was born. “Jan” would go on to co-host the 2016 Helpmann Awards.

Nowadays, apart from teaching acting and running her own company, Amazon Woman, she does cabaret shows such as her Joni Mitchell tribute, “Blue”, and some musicals – if she likes them.

She’s lived in Sydney, Brisbane, Sydney and Brisbane and now Melbourne, where she moved four years ago to play the role of Cassandra in “King Kong: the Musical” and where she’s also played the witch in Victorian Opera’s “Into the Woods”.

But now she’s living out her greatest role of all. For after years of unsuccessful IVF, her half-sister donated an egg and, with her Victorian farmer partner Johnny, she has given birth to Billie – she’s a proud, excited mum.

And that’s better than playing either the Wicked Witch or the Killer Queen.

“We Will Rock You – The Arena Spectacular”, AIS Arena, November 7-10, bookings to premier.ticketek.com.au 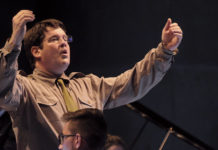 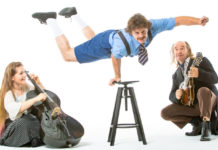 Music that helps the mind

CityNews - July 4, 2020
0
A 19-year-old Chisholm man is the third to face charges relating to an attempted aggravated robbery in Wanniassa in June.