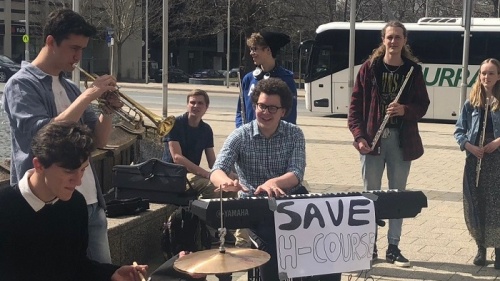 CANBERRA’s fondness for turning on a music demo was once again on show today (September 5) outside the ACT Legislative Assembly as concerned staff and members of the Canberra music community protested against the axeing of a course at the ANU School of Music.

But the demonstration came rather late in the day, after the news only recently trickled down to shocked teachers, who had been unaware of a decision announced in February this year, to transfer away funding for Course H, a year 11 and 12 pre-tertiary auditioned course, along with the “Music Engagement Program” for little children.

Both courses had been paid for by the ACT government, and senior administrators at the School of Music believe there has been some confusion – it was the Government which made the cuts, not the school, which, they pointed out, was busy developing courses for young people, including girls’ jazz and a community school of rock.

Year 12 students in the course who were protesting against the cuts, drummer Angus Henderson and trumpeter Matt Trigger, told “CityNews” that the demo was about getting the message out, as the move was affecting a lot of people, while drummer Alexander Wankura, a graduate of Course H’s class of 2017, described it as a path to further music studies.

On hand were members of the Legislative Assembly, including Opposition spokesperson on the arts, Vicki Dunne and Greens MLA Caroline Le Couteur, who lamented that “Canberra is no longer supporting arts in the way it used to”.

ACT Arts Minister Gordon Ramsay was interstate on assembly business, but a spokesperson for artsACT explained the government’s refocussing of programs provided by the ANU under the Community Outreach Program away from supporting students in the school environment to supporting members across the whole community.

The spokesperson confirmed that the decision had been announced in February and added: “Canberra students… still have many other ways to access music programs including the new Developing Musicians Program (non-auditioned for Year 7 to 12 students for music tuition and ensemble performances).”

A statement from the School of Music yesterday said: “The Australian National University’s School of Music offers the ANU Extension Program’s Advanced Music Course, which provides one-on-one tutorial for year 11 and 12 ACT music students and is delivered with support from ArtsACT and the ACT Education Directorate.”

“ArtsACT has confirmed it will transfer funding towards other community-based arts and music programs from 2019. While this decision will not affect students currently enrolled in the program, ANU is unable to open enrolments to students from 2019,” the statement read.

While expressing disappointment with the decision to discontinue “this fantastic program”, the school said it welcomed the Government’s commitment to enhancing Canberra’s cultural sector.

But while distressed community members were urging politicians to reverse the cuts, a showcase of the “new era“ at the ANU School Of Music was running over two days on campus, announced under the heading “a Phoenix rising – with new ideas, approaches and curriculum”.

The showcase, coordinated by Steven Mottlee, placed emphasis on the School of Music’s composition and recording curricula, described as a “re-imagining of what music is in the digital age”, as well as a course on Australian Indigenous Culture, history and contemporary issues through music, and cutting-edge online language courses.