THE role of Madame Butterfly, Cio-Cio-San, the tragic heroine of Puccini’s opera, “Madama Butterfly”, is one of the most demanding in the repertoire, but soprano Sharon Zhai is up for it.

A fully staged version of the Puccini classic is coming to Canberra, conducted by Warwick Stengårds with an 11-piece chamber orchestra and chorus drawn from Woden Valley Youth Choir.

It’s a solo debut with Opera Australia for Zhai, who trained at the Central Conservatory of Beijing, took out a masters from the Sydney Conservatorium, performed for eight years in Italy, married an Italian auditor from KPMG, then moved with him to Australia at the end of 2016.

While she has sung many principal soprano roles in Italy, including Gilda and Desdemona, this is the first time she has played Cio-Cio-San, the delicate butterfly-like child bride of Puccini’s opera.

“It’s a difficult role; I’m on stage most of the time, which is unusual, and the character is very challenging because she is always changing her moods and emotions… it’s not only technically difficult for me as a soprano, but it requires exceptional physical stamina to act at the same time – but I enjoy it,” she says.

Briefly, the opera is set in late 19th century Nagasaki when Americans were making their first inroads into the country. Lt BF Pinkerton negotiates to marry a delightful young teenage girl, making no bones about his plan to return to the US and marry a “real” American wife – but Cio-Cio-San has no idea of that and tragedy ensues.

“I love Puccini and ‘Butterfly’ is a symbol of all the women of the world,” she says.

“It’s not just a story from the past it is very appealing to people nowadays, too.

“Cio-Cio-San is a 15-year-old girl, she is very naive and falls in love with Pinkerton with no understanding that he is just after temporary pleasure.”

Zhai is well aware of her role as a Chinese woman playing a Japanese girl, but she’s done some research and says: “There are a lot of similarities; in Japan they used a lot of Chinese culture then formed their own culture, but a lot of the costumes and hairstyles come from China.”

Zhai points out that in the social context of the time and possibly even now, many Asian women regard walking out with a Western man as prestigious, but she is not just a Japanese doll, she is a loyal wife, faithful and prepared to wait for her husband – the Western way. She is also very brave, prepared to sacrifice her life for her child and she converts from her own religion to Christianity for love.

“This is similar to me,” Zhai says. “I was a Buddhist, but then I married a Catholic and to get married in a church I had to convert to Christianity… nowadays many women convert to another religion for love.”

But Cio-Cio-San’s conversion papers over her deeper culture. Her father committed suicide on the orders of the Emperor of Japan.

“She wants to refuse her culture, but in the end she suicides – that is what her culture is told to do,” Zhai says.

In her own way, Zhai believes, Butterfly stands up for herself by committing suicide.

“She wants her son to have a better future and says; ‘For honour I must act this way’.

“Act One is famous for its very difficult love duet, but I enjoy singing it the most, it’s so beautiful.”

As with “Romeo and Juliet,” it’s no secret what happens at the end.

“Her final decision to commit suicide is heartbreaking,” Zhai says.

“She sends a message to Pinkerton to come back in half an hour, then at the moment he sees her, she kills herself in front of him – it’s very powerful, it’s shocking.” 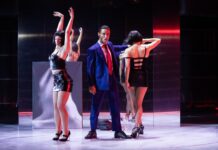 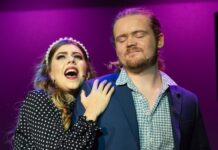 Helen Musa - June 22, 2021
0
In a coup for the Canberra Theatre and its director Alex Budd, it was announced at a reception this morning (June 22) that the Broadway musical “Come From Away” will be coming to Canberra in November.