Hywel Sims will take up the reins as CEO, while Anne Frankenberg will step into the newly-created role of deputy chief executive, based in Melbourne.

Sims has been a member of Musica Viva’s senior management since 2014, initially as director of development and now as general manager, Victoria, where he oversaw strong box-office results, new supporters and the successful delivery of the first Melbourne International Chamber Music Competition to be delivered by Musica Viva.

With a background leading organisations in the UK, US and Australia, Sims brings a broad international perspective, as well as a commitment to music in Australia fostered through his work with Gondwana Choirs and more recently – Musica Viva.

“At its heart, chamber music is about collaboration and partnership,” he says. “Musica Viva, created by passionate individuals, exists to present the best of the world’s music to Australians, foster the next generation of Australian musicians and provide equal access to expert music education in the country’s schools. I’m delighted to partner with Anne Frankenberg and the management team in achieving this vision.”

Frankenberg is currently deputy general manager at the Australian National Academy of Music, but has had an arts management career with the Victoria State Opera, Opera Australia, and 3MBS Radio.

“Both leaders have a strong background in nurturing young talent and supporting the small-to-medium companies that shape the national arts landscape – a mission that forms the cornerstone of our artist development work,” chairman Graham said.

Artistic director Carl Vine will leave Musica Viva at the end of 2019. 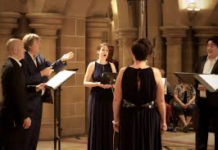