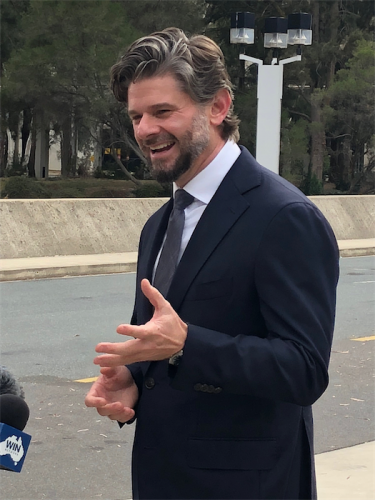 IF the newly-announced director of the National Gallery of Australia, Nick Mitzevich, was feeling nervous this morning (April 10) when he fronted the press in Canberra, he wasn’t showing it.

Dispensing with formalities, Mr Mitzevich declared that it was “an amazing honour” to be appointed to the job and that he was “really looking forward to working here”.

No stranger to the NGA, he said he had been a regular visitor when he was an art student, standing in awe before Jackson Pollock’s loopholes and the Andy Warhol works in the national collection.

Learning and education, Mitzevich said, would be his main focus. Trained as an art teacher, he said he believed that the art experience was a two-way one and that he intended to fill the gap between artists and viewers.

Learning, he said, could happen both in Canberra through the touring exhibitions that he saw as the “bedrock” of the gallery’s function and that wouldn’t just be for school children.

When asked about plans to extend the gallery’s footprint, Mitzevich said: “a physical presence expands when it is bursting at the seams”, adding that if he had anything to do it do with it, the gallery would be jam-packed with activity.

He welcomed a federal inquiry into funding of the ACT’s museums and galleries, saying that for all of those bodies “along the boulevard” that also takes in Questacon, the National Library of Australia and the National Portrait Gallery, it is important to harness resources in a collective way ensuring that the cultural sector was not segmented.

He said that in his view, justification of the gallery before an enquiry should not be in terms of visitation numbers alone, and that other factors like cultural diplomacy and education were equally important.

Not yet 50, Mitzevich is known for his dynamic fundraising initiatives, and in that area, he always followed the philosophy that “money follows good ideas”.

Asked if he was yet another “bloke in a plum job”, Mitzevich replied, “I am who I am”. He said he believed that in part he had been hired for his attention to inclusiveness and that he would be attending to the triple themes of Indigenous Art, tolerance and diversity.

As for coming up with sensational blockbusters, he said, “I’ve got lots of big ideas but you’ll have to wait”, ensuring those present that he would share those ideas with his curatorial staff.

But coming exhibitions, whether big or small, would aim “to make sure Canberra is a good place to visit”.

Nick Mitzevich takes up the directorship of the National Gallery of Australia on July 1, 2018.