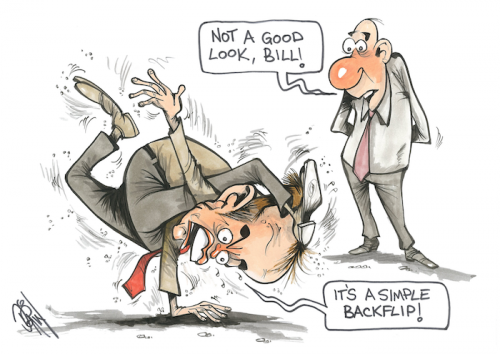 THE media loves to catch politicians out doing the flip-flop or the back-flip.

The thing is that politicians make decisions by carefully balancing the scientific and statistical evidence, weighing up the impact on ordinary people and counting the financial and long-term costs. And pigs can fly! The Pauline Hanson statement on the flip-flop will, no doubt, be embedded into the political lexicon: “One Nation will not be supporting company tax cuts. So, I haven’t flip-flopped. I said ‘no’ originally, then I said ‘yes’. Then I have said ‘no’, and I’ve stuck to it”.

Perhaps, by defining the art of changing policy mid-stream, Senator Hanson will have made a significant contribution to the language of politics after all.

If the stance of a politician never changes there is a problem; new evidence comes to light, issues that have not been considered previously are added to the bank of knowledge. There are constant cultural changes. And compromises need to be made if there are to be outcomes. A minor matter to some is of great importance to others. Being able to consider new evidence, to reflect and to change thinking is a reasonable sign of an intelligent approach.

Opposition Leader Bill Shorten’s “captain’s call” on company tax cuts for medium-size businesses is a case in point. Of course PM Malcolm Turnbull is going to call it a backflip and frame the decision as poor leadership. Making such a call carries a high risk.

Labor opposed tax cuts for multinationals and supported them for workers. However, medium-size businesses presented a dilemma for Shorten. With turnover of between $10 and $50 million, medium-size businesses support the employment of more than a million Australians. However, many of them also return a disproportionate profit for their owners compared to the workers whose wages have remained stagnant for more than a decade.

Shorten’s “call” may have made sense if he had simply considered the evidence, carefully weighed up the statistical data and attempted to make a decision in the best interests of the community as a whole. However, the political reality was to cause the back-flip.

Following the statement on business tax breaks, Bill Shorten was in a losing position knowing any change to the decision would be described as a “back down”. A series of by-elections in the wind and clear differences within the Labor Party made it harder. Shorten took the opportunity to demonstrate the importance of being able to change his view because in his own words: “Smart politicians don’t just lead, they listen”.

Changing policy on rare occasions should not be seen as a mortal sin and reversing opposition to these tax cuts was sensible. A proper process of reconsideration without a predictable outcome reflects strong, rather than weak, leadership. Having such calls regularly reviewed would be a sign of poor judgement and poor leadership. However, never having decisions reconsidered would be more like a dictatorship.

The cross-benches in the Senate have made the tax and other negotiations difficult. In his inaugural speech as a senator, Nick Xenophon spoke of making decisions issue by issue rather than trading one issue for another.

“Horse-trading implies a willingness to vote for something you don’t believe in, in order to get something else you want,” he argued. “Sometimes when people do try and horse-trade they can end up with a donkey or, worse still, end up making an ass of themselves.” It is a shame that this lesson was not picked up more generally.

With a Xenophon approach there would be far less flip-flopping and a much clearer and more transparent process in decision making. However, in the end, politics is about the contest of ideas and games are part of the process.

No parking fines for marooned cars

CityNews - January 20, 2020
1
WITH a large number of damaged and undrivable car stuck in government-controlled car parks and roadside parking, the ACT government has announced that they will not be fined.