ELECTION funding and “strongman politics” are seriously threatening the fabric of societies.

The divergent approach to government between neighbours Canada and the US provides an insight into what is happening to democracy.

While the Americans have chosen “strongman” politics and the influence of the ultra-wealthy, the Canadians are revisiting their “first-past-the-post” electoral system to examine fairer ways of running elections.

The contrast between Justin Trudeau and Donald Trump could not be starker. On the one hand, the Canadian Prime Minister extends the hand of warmth to some of the most vulnerable, including genuine refugees. On the other, the American President builds walls, separates families and threatens those with whom he disagrees or does not understand.

The American President takes democracy backwards in psychological association with other international strongmen such as Recep Tayyip Erdogan in Turkey, Xi Jinping in China, Petro Poroshenko in Ukraine, Rodrigo Duterte in the Philippines and Vladimir Putin in Russia. The flipside sees an alignment of Canada’s Trudeau with leaders such as President Emmanuel Macron of France, Angela Merkel in Germany and Jacinda Ardern of NZ.

The failure of political strongmen to walk in another’s shoes is key to the process of undermining the fundamental freedoms of societies. This inability allows marginalisation on the basis of race, religion or behaviour. History provides a myriad of extreme examples of strong leaders initiating racial war and violence, religious conflicts and persecution of gay and lesbian people.

The bellicose language of strongman Trump in threatening Iran is illustrative. From the presidential election, Trump was painting Iran (along with North Korea) in the black hat and the US in the white hat.

Iran continues to claim that it has not initiated a war for centuries and is not a threat. The same is certainly not true of the US or Israel. If Trump allowed himself to stand in Iranian leadership shoes he might recognise the constant threat of the US as a world power. He might see it was really about oil supplies, the influence of wealthy American supporters of Israel or just different coloured hats.

Again and again strong leaders have taken their people down a narrow path of marginalisation and hate. The majority in these communities are rarely under threat. The challenge for all societies is the protection of minorities. In a strong democracy with appropriate protection of minorities, leadership is contained through the separation of powers with a key role for the Constitution and the judiciary.

The strongmen of Turkey, Cambodia, Russia and China, as just a few examples in recent times, have undermined this separation, and moved closer and closer to authoritarianism. Barack Obama and Madeleine Albright, in her book Facism: A Warning, caution the world of the growing authoritarianism of Donald Trump.

Tony Walker also warned of the spread of authoritarianism recently in “The Conversation”. Walker picked up the term from Gideon Rachman in “The Economist” and elaborated on the impact of “macho leadership”.

He identifies “fake news” as a descriptor used to dismiss inconvenient truths that challenge “authority” and attack freedom of the press. These leaders enhance their own media (and social media) while restricting others and should provide a warning for Malcolm Turnbull regarding Australia’s concentration of media ownership’s constant undermining of the “inconvenient” ABC.

It is not all gloom and doom. In the ACT, Opposition Leader Alistair Coe came out strongly supporting Chief Minister Andrew Barr in the establishment of the Integrity Commission. The legislation might be a long time coming, but will see a watchdog on corruption across the ACT government. It adds another layer of protection to the ombudsman and the human rights commissioner. 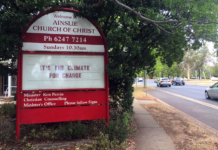 CityNews - February 27, 2020
0
AFTER almost 40 days of firefighting, the Orroral Valley fire, which cut a swathe through the Namadgi National Park and threatened Tharwa and some of Canberra's southern suburbs, has been declared as "out".