THE National Museum of Australia and the National Australia Day Council this morning (December 13) launched an exhibition of personal objects chosen by the eight 2019 Australian of the Year state and territory recipients.

MC Alex Sloane, who described the exhibition as “touching and beautiful”, said that the exhibition of objects, which told a something about the lives, aspirations and experience of the recipients, was well on the way to becoming an annual institution.

National Museum director Mathew Trinca said: “We hope many Australians will see this exhibition and reflect on the issues raised by the object before us.”

CEO of the council, Karlie Brand, told those present that this was the fifth year in which that they had collaborated with the museum to create this unusual exhibition.

Black, who works to counter the stigma associated with teenage pregnancy, told those present about her “Brave Foundation”, which provides resources and education opportunities. Black’s choice of object was the manuscript and a published copy of her book “Brave Little Bear”, in which she shares her experiences as a teen mum. 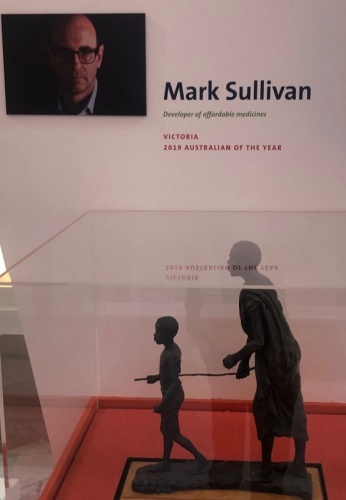 Sullivan outlined what his organisation, Medicines Development for Global Health, did in treating neglected tropical diseases as “a hidden thing”. He had chosen to exhibit a small version of a sculpture seen at the World Health Organisation depicting an African boy leading a blind man.

Heroic Australians of the Year, Craig Challen from Western Australia and Richard Harris from South Australia, were “twins” professionally, both having been involved in the rescue mission to save 12 children from a cave in Thailand. Challen’s chosen objects were “The Ashley book of Knots” and a couple of sample knots – crucial in rescue operations.

NSW Australian of the Year, sportsman and disability champion, Kurt Fearnley, had on display gloves he had worn in the 2018 Commonwealth Games Wheelchair Marathon.

Queensland Australian of the Year, detective inspector Jon Rouse, chose the badge and a matching ceramic scorpion to indicate the lengths to which he and his organisation Task Force Argos would go in fighting child exploitation and abuse.

Finally, Northern Territory Australian of the Year, the AFL champion and community leader Michael Long chose the sandals he wore on his 2004 “Long Walk” of more than 650km from Melbourne to Parliament House in Canberra, which the National Museum already owned.

The Australian of the Year awards will be announced at Parliament House, Canberra on January 25. The exhibition will be at the National Museum of Australia until February 17 and will then tour nationally.