I HAVE some admiration for Jon Stanhope – both as a former chief minister and his Arboretum legacy, which will serve Canberra for a very long time. But I must take issue with his opinion that “Middle-class values smother our compassion” (CN, December 28).

I’m okay; I’m white, an Anglo/Celtic, fourth-generation Australian, sitting somewhere within Jon Stanhope’s “middle-class values”, happy in my place and living a good, reasonably healthy life in semi-retirement but I am troubled by what I see around me.

I see that we spend billions (about $25 billion annually) but still can’t get the social and health aspects of our indigenous population more advanced than some of the overseas countries to which we provide aid.

I listened to a discussion on the radio the other day that came to the conclusion that “the government needs to do more to reduce the incarceration rate of the Aboriginal population”. I have listened to the ongoing debate about Australia Day/Invasion Day and hear the arguments that drive individuals to take particular positions.

The government will not devise a solution to reducing incarceration rates without creating another generation of equally disaffected individuals. I also believe that while the protestations of urban “first people” may lead to a change to the present Australia Day date that will not change attitudes nor contribute to the betterment of the indigenous population living “in country”.

And the solutions are not a matter of money. To reduce incarceration rates, two primary intervention circuit breakers need to be in place: parental intervention and ambition.

Cartoonist Bill Leak was right inasmuch as there is a significant portion of indigenous parents who cannot or will not guide, mentor or properly bring up their children, not all but a significant number. And before the screams of outrage, let me explain.

Parental intervention means taking responsibility for the kids brought into this world, for imbuing them with a sense of worth, ambition and the rule of law – whatever law that is – tribal or common; ambition means a belief that, at the very least, modest accomplishment is a worthwhile pursuit.

So let’s really examine the circumstances:

The indigenous population of Australia is some 700,000 (about 3 per cent of the population) and not vastly different from estimates at the time of European settlement. While there is evidence of aquaculture and agriculture, the indigenous population practiced subsistence living for 50,000 years. With some exceptions no permanent villages evolved and trade was that which could be accomplished within walking or sailing distance.

Ambition was survival driven through the rule of tribal law, the role of elders and a history recorded through storytelling, dance and art.

So what happened? Yes, for the indigenous population colonisation was the end of their known life, pretty much the same as for the North American Indian population.

Did my forebears contribute to indigenous dispossession? They almost certainly did. Do I feel guilty about it? I don’t, it happened long before my time, but that does not stop me expecting the indigenous population to be given “a fair go”, but that has limitations when there is no reciprocity, an attitude of resentment, an expectation that “the government” will continue to pay for the original sin and a disdain for “whitey”.

For my own part my forebears came to this country in the 1830s, listed on ships’ manifests as servants and labourers but with sufficient ambition to read and write and a determination to find a new and better life in this country. That this occurred to the disadvantage of the resident population is regrettable but a not unusual circumstance 200-300 years ago.

This has started with Welcome to Country and smoking ceremonies, but it needs to go much further through storytelling, dance, bushcraft, Aboriginal tribal law, language and developing a sense of urgency with every indigenous kid that they have a personal obligation to evolve and express their culture and take pride in their history and place on this earth. This may take another 100 years, but the journey will be well worth it.

For while ever there is a sense of hopelessness, despair, anger, total disregard for community norms and an abrogation of parental or community responsibility, we will continue to see the rate of indigenous incarceration increase.

There are limits to the tolerance levels of even the most charitable individuals, and I think that the portion of the indigenous population intent on turning every circumstance into a battle cry of dispossession and disadvantage do themselves a disservice. Let’s focus our energies on the really serious issues that can only be rectified by a hell of a lot of good will and a unified commitment by everyone.

It will not be achieved by governments or legislation without another cycle of children “taken into State care” or sent to ‘boarding school’ in order to resolve the problem. One would think, given the mistakes of the past, this option is to be avoided.

There is a better way, but that must be generated internally, within the indigenous community.

Brian Franklin is a Canberra-based writer and project management consultant. This is an abridged version of his original article. 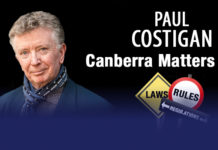