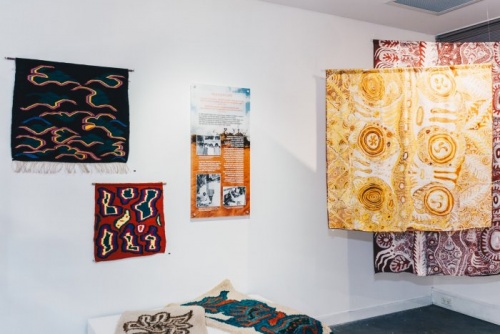 ERNABELLA Arts is celebrating its 70 year anniversary in 2018, which is definitely an achievement worth celebrating. Located in the Pukatja Community, at the eastern end of the Musgrave Ranges in the far north west of South Australia, it is the oldest Indigenous arts centre in Australia.

In 1971 and 1972, five women from Ernabella travelled to Sturt Workshops in Mittagong to learn new weaving techniques from Elisabeth Nagel, who led Sturt Weaving Studio for 50 years and, in the late 1960s made visits to Ernabella to share her knowledge.

Later, three women went to Indonesia to learn batik, and this was a strong area for many years and continued the use of the “walka” pattern.

The artists were introduced to clay in 1997 through workshops at the JamFactory in Adelaide and they built a kiln in 2003. This exhibition includes many ceramic works alongside the historical batik and woven and hooked works.

Large jars and spheres are carved with flowing leaves and vines that wind around the surfaces. Other works are carved with fine lines, juxtaposing and creating a dynamic surface. Several works are more representational: a platter has rows of ants crawling across the face of the platter, surrounded by the “walka” pattern and a design of leaves.

The women also developed the use of wild harvested grasses and, using their skills of wrapping, twisting, spinning and knotting yarns, sculpted all kinds of objects: dogs, kangaroos, snakes, rabbits, and baskets. They are whimsical, intricate and best of all, fun. The artists have created vignettes, such as the “Mission School”, and an “Old Time Cart with Camels”.

This is a comprehensive exhibition, showing contemporary works including paintings, alongside several historical pieces. It’s a fine way to celebrate the historical connection between these two craft organisations that have given so much to two completely different communities, and at the same time to Australian craft.