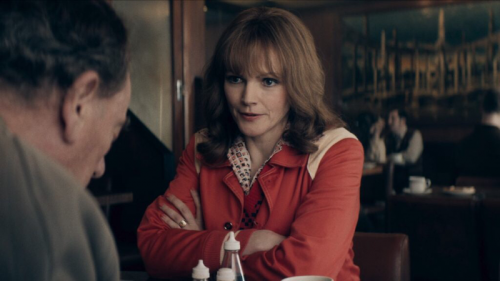 THE theme of the clown who lives by making people laugh but whose own life is filled with personal grief is well enough known – think “Pagliacci”.

Adrian Shergold’s film offers a 20th century view of a clown who defies the mould. We never know the registered name of the waif from a working-class Leeds neighbourhood. In childhood, she must learn to fend for herself. As an adult, she suffers outrageous fortune’s slings and arrows not always without complaint, understanding that a life full of nothing to rejoice about can only get better, but there are no guarantees.

“Funny Cow” the movie, written by Tony Pitts, offers a tour de force performance from Maxine Peake. To Australian audiences, her long filmography may be mainly TV series and short films. She has played in films written by Shakespeare, from “Hamlet” to “Titania”. She’s perhaps best known here as Martha Costello QC in the BBC’s excellent legal series “Silk”. Her command of nuances that need a camera’s closeness to exploit to best advantage is profound.

The men in Funny Cow’s life don’t come out all that well – an abusive father, a domineering, selfish husband, even Angus whose educated cultural preferences are beyond her comprehension. Stand-up comedian Lenny (Alun Armstrong), whose understanding of life’s realities is a burden hard to bear, lacks the inner strength to survive in the harsh craft of amusing a pub full of working-class men with jokes that are less than funny.

In final analysis, “Funny Cow” is a film about comedy that’s not funny. It has moments that bring gales of laughter but it delves into its heroine’s psyche hoping eventually to find emotional comfort that its social environment cannot provide.
It’s a great film.