APPARENTLY, today is Selfie Day and with it comes research that says more than two million selfies a day are snapped nationally, with an estimated 742 million taken each year.?? 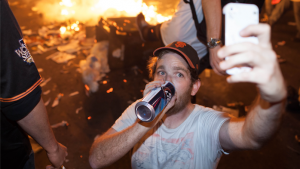 However, the survey of 2033 people by finder.com.au finds only 48 per cent of the population take part in the practice.

Tech expert Alex Kidman says: ??“Until recently selfie wasn’t even a word, but now Aussies are generating 14 million of them every single week. You’d be hard-pressed to go a day without seeing one in your social media feed.”

The research also shows 23 per cent of respondents admitting to snapping a selfie at an inappropriate time; 12 per cent took selfies while  having sex, while they were naked or on the toilet while 7 per cent had taken a selfie while doing something illegal or stopped by police.

Of Generation Y respondents, 77 per cent take selfies 84 times a year on average compared to the 18 per cent of Baby Boomers who take an average of three selfies a year.