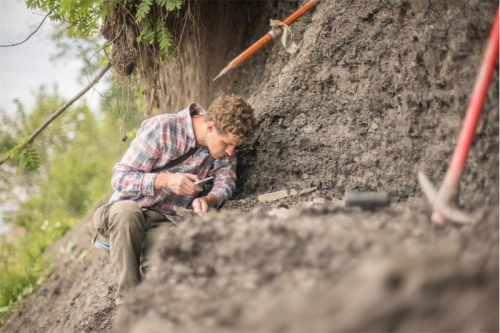 SCIENTISTS from ANU are helping to solve the mystery of the world’s oldest large fossils of strange organisms that grew up to two metres long and lived more than 500million years ago.

Lead researcher Ilya Bobrovskiy from ANU said around 541 million years ago there was a transformational event for Earth known as the “Cambrian explosion” of life.

“The ‘Cambrian explosion’ was the beginning of when complex animals and other macroscopic organisms started to appear massively in the fossil record,” he said.

Since the fossils were first discovered at Ediacara Hills in South Australia in 1942, debate has raged about whether Ediacara biota are the earliest animal ancestors, failed experiments of evolution, giant unicellular organisms, lichen or bacterial colonies.

The fossils analysed in this study were collected from near the Lyamtsa village in Russia.

Co-researcher associate Prof Jochen Brocks said the team developed a new technique to study these fossils by extracting molecules from the organic remains.

“The molecules tell us that one of the Ediacara biota fossils, ‘Beltanelliformis’, was not an animal, but rather a colony of photosynthetic bacteria,” said Dr Brocks.

“This is just the beginning. We can now apply the same approach to figure out the nature of other organisms of the Ediacara biota.”

Helen Musa - May 2, 2021
0
A new book about the director of the Canberra International Music Festival, Roland Peelman, was launched yesterday. Arts editor HELEN MUSA was there.

CIMF / A splendid concert: thanks to all, including Mr Mozart!