ENJOYING an international circus career and looking after a young child is quite a balancing act for Cyr wheel artist Anna Lewandowska, coming to Canberra Theatre soon as part of Cirque Stratosphere – but that’s what she does best.

Lewandowska and her former circus-performer husband live in Montréal, Canada with their five-year-old daughter, audible in the background as we speak by phone, but she’s about to embark on a whirlwind tour of Australia on contract with the very new company Cirque Stratosphere.

The entirely new circus is from the Works Entertainment, a division of the Cirque du Soleil Entertainment Group who created “Circus 1903” and last summer’s “The Illusionists: Direct from Broadway”.

They plan to transform the Canberra Theatre stage into “a futuristic space-age utopia” for its world premiere.

Billed as family-friendly entertainment, management promises that the stunts “will elevate, thrill and bewilder… this is a journey out into the stratosphere that will leave audiences stunned and amazed by seemingly impossible aerial feats.”

There’ll be the “Columbian Wheel of Death”, stunts on roller-skates, acrobatics on a “Russian Bar” where the performer is thrown in the air by two partners holding the bar, and Lewandowska’s own performance on an LED light wheel, which requires perfect balance and timing.

“I was living in Poland, taking part in competitions and this kind of stuff, but when I was 20 I went to Montréal to join Cirque du Soleil, which is how my career started,” she says.

“Montréal is the circus capital of the world,” she asserts, and proof apparent is in the number of Chinese and Russian circus artists trying their best to get in.

With Cirque du Soleil, she travelled all over the world performing for seven years, but is thrilled to have settled down at Montréal’s Cirque Éloize, a contemporary company founded in 1993 by Claudette Morin, Jeannot Painchaud, Julie Hamelin and Daniel Cyr, who gives his name to the large metal wheel in which Lewandowska performs.

Her expertise is in the aforementioned Cyr Wheel, based on a deceptively simple idea of a big metal wheel spinning on the floor. 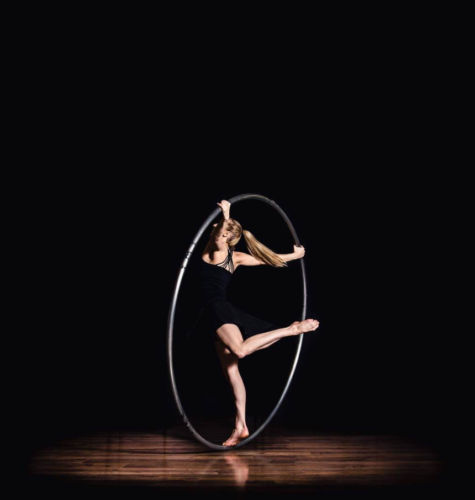 But as with everything else she does, the balance is all-important – “you have to be a certain size and a certain height and a certain weight to perform on the Cyr wheel,” she says.

“Basically it’s a spin where the person transfers weight from one foot to another in perfect timing… and it takes quite a while to get the wheel spinning.

“Once you get it spinning, then you can do different tricks to make it more interesting for audiences.”

There’s going to be a first for her this time, when she also performs on the LED wheel.

“It’s the same thing, only the LED one has light switches which are controlled by a person at the side… I’m told they can flash all sorts of images, including a logo if they need – it’s a lot about technology,” she says, adding, “but for me, it’s pretty much dance.”