THE 2019 Alliance Française French Film Festival is back in Canberra this month and with it a more sophisticated understanding of what the term “French” can mean.

Gone is the overwhelming dominance of Gallic homeland films and coming to the forefront is an increasing recognition of the vitality of the French language as spoken in its former colonies and dominions.

Canada is one such, and the 2019 festival features films by three Canadian directors, “Genèse” (Genesis) directed by Philippe Lesage, “La chute de l’empire américain” (The Fall of the American Empire) directed by Denys Arcand) and “L’Extraordinaire voyage du fakir,” (The Extraordinary Journey of the Fakir) directed by Ken Scott.

“Believe it or not, most people are still not aware that we speak French in Canada,” says Mary Lou Hayman, from the Canadian high commission.

“It has an enormous audience in Australia, so it will help us in our advocacy efforts in a beautiful, creative way.”

She is particularly chuffed that a 30-second cinema ad will be screened that promotes the Government of Canada’s commitment to clean oceans before half of all festival screenings.

Despite the high reputation of the Toronto International Film Festival, Hayman is aware that her country’s film industry has long been swamped by the huge neighbour to the south, but she believes that the bilingual character of Canada offers a unique experience to viewers.

Besides – she produces figures – in Montreal, there are close to 35,000 direct film industry jobs, 500 production and distribution companies and more than 600 films shot every year in the city, where there are more than 50 film studios, including one of the largest in North America, Studio H.

Quebec produces the highest volume of Canadian feature films among Canada’s provinces, which she attributes to the strong support given to protecting the French language and Quebec’s culture through governmental assistance. And, of late, the film industry in France has shown a greater interest in buying Quebecois films.

To be sure, Hayman says, the festival has been quick to embrace films from nearby countries such as Belgium and Switzerland, but there are thriving industries in diverse countries, from Morocco to Canada and they need to be seen.

Hayman points to the more thoughtful aspects of the Canadian films to be screened, although they run the full gamut from light to serious, from fictional to documentary.

Undoubtedly the Canadian pièce de résistance will be winner of Best Film and Best Actor at the 2018 Montréal Festival of New Cinema, “Genesis” in which writer-director Philippe Lesage turns his camera on teenage half-siblings Charlotte (French actress Noéé Abita) and Guillaume (French-Canadian actor Théodore Pellerin), as they wrestle with their emerging sexuality, gay and straight.

The high commission will feature that film at its “Canada Night” on March 21, when Gemma King, lecturer in French studies at the ANU, will conduct a Q&A on the themes of the film, including fluid sexuality. The high commission’s lovable mascot, Pierre the Polar Bear, will be on hand to pose for photos.

Artistic director of the festival Philippe Platel has selected 54 features and documentaries showcasing across 12 distinct categories. 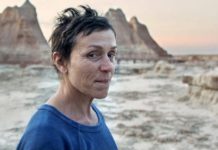